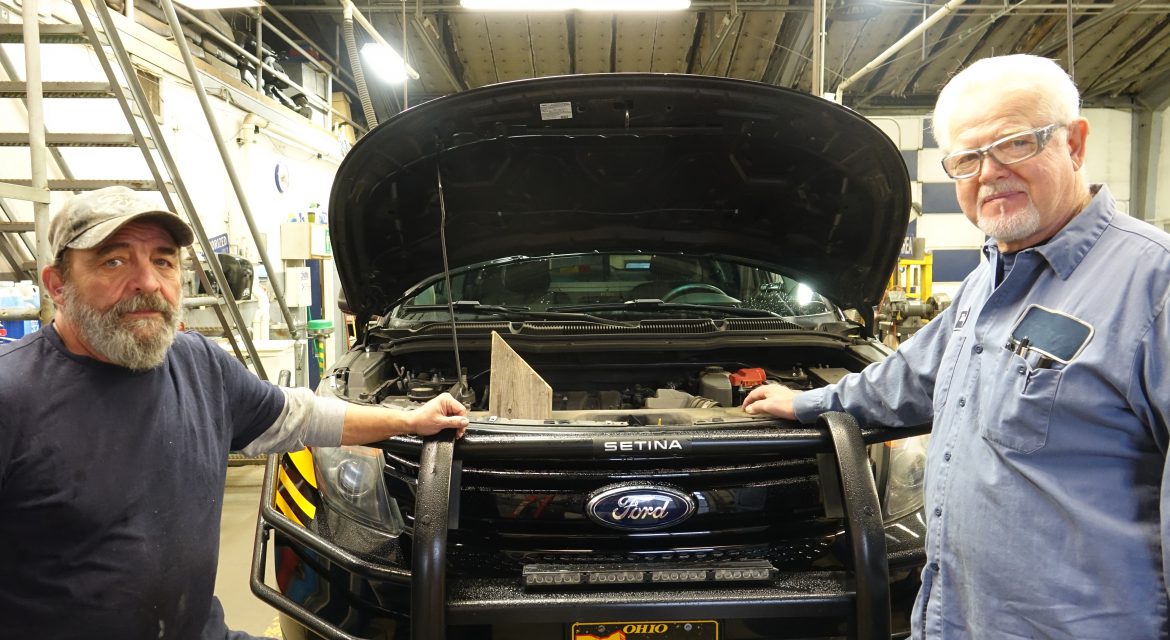 BATAVIA, OH (Dec. 7, 2022) — Dusty Kiser and Dennis Shively, mechanics in Clermont County Fleet Maintenance, have accumulated almost 100 years of experience working on everything from mowers to motorcycles. Both are triple Automotive Service Excellence (ASE) master technicians in automotive, heavy trucks and buses – a rarity in their profession.

They change oil, filters and fluids, and repair and rotate tires. They work on lighting, sirens, electrical, speakers, invertors, exhaust and brakes. They do body work and fabrication.

If that’s not enough, they also manage gas and fuel pumps, provide roadside service, and sharpen mower and chainsaw blades.

“Water pumps, generators, drones, a large TV… we’ve done it all,” said Kiser, 71. “We do a lot of metal fabricating and make our own tools. It’s pretty interesting stuff.”

“If it’s mechanical stock and it’s owned by the county, we’ve worked on it,” said Shively, 60. He celebrates his 34th year with the County on Dec. 11. Kiser has been with the County for 39 years.

Kiser began his career with Clermont County in 1983 with a 10-year stint at the Water Department. He worked at several locations, handling duties such as purchasing, distribution and safety.

When his manager moved to Facilities, Tom Meyer, and Commissioner Martha Dorsey implemented plans to centralize Fleet Maintenance, Kiser moved into the new unit. Prior to 1993 each department had its own maintenance program. Fleet Maintenance was set up as a profit center funded with reimbursement for labor provided to various county departments.

“It was a new concept, built from the ground up,” Kiser said.

Shively also came to the centralized Fleet Maintenance during its inception. He had been with the Engineer’s Office since 1987. Like Kiser, he has military experience. Shively worked as a technician for Marine Corps construction. Kiser was a maintenance specialist in the Army, working on nuclear weapons.

Continuous advances in technology keep the job fresh. They stay abreast with the latest through seminars, sharing info with their networks of other mechanics, and plain-old Googling.

“Every day, with Dusty’s experience and my experience, we find ourselves communicating back and forth,” Shively said.

Kiser added: “We call our buddies and pick their brains. And we have people calling us all of the time asking for our advice.”

Their work can involve off-hours emergency situations. They got called in five straight Christmases to repair trucks and snow plows and take care of other situations. Winter storms can cause hydraulics to burst and salt attacks electrical connectors. Vehicles are damaged sliding off icy roads.

Shively recalled being told to go south during a storm and ended up working 17 hours. “We’ve seen a lot here,” he said.

Over the years, they have developed their own specialties. Kiser, for example, handles Sheriff’s vehicles and Shively specializes in heavier diesel trucks. “We can do everything, but we have our areas of specialization,” Shively said.

Both said the county’s benefits package helped keep them at Clermont County for so long. They also like the meaningfulness of their jobs.

“You feel like you’re a part of something, working for people like the Sheriff’s Office and what they stand for: Keeping people safe,” Kiser said. “It becomes kind of a badge of honor.”

Shively added: “There’s a feeling of accomplishment and pride.”