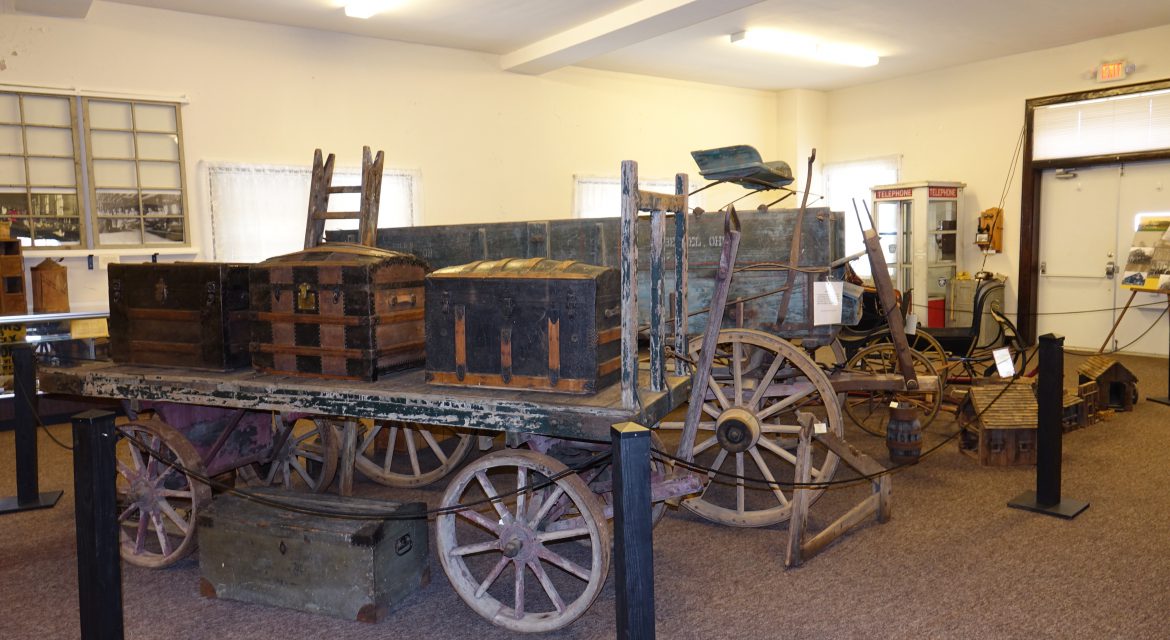 BETHEL, OH — Judi Adams, president, and Roma Ritchie, trustee and secretary, of the Bethel Historical Society and Museum proudly welcomed a visitor to the Grant Memorial building at 100 S. Main St. on a clear spring morning.

Bethel Historical Society celebrates its 50th anniversary this year. The society purchased the building from the Village of Bethel on Feb. 5, 2019. Since then, the museum has expanded displays from one room into most of the two-story brick building in the heart of downtown.

“About six years ago, the Historical Society had two meetings with no quorum,” Adams said. “We were concerned if people would like this to continue. We had to decide if we were going to give back everything or make this bigger and better. We decided bigger and better.”

The society raised $44,000, enough to cover operating expenses for more than two years. They bought the building from the village, which was considering selling it, for $1 in 2019. A $40,000 capital grant received from the State with help from Clermont County Community + Economic Development last year helped with building repairs.

As Adams points to an elevator that was built in 1998 in conjunction with Bethel’s bicentennial, she notes that most of the items in the museum have been donated in the past six years. People give items when grandparents die, or decide to contribute items after touring the museum.

Museum members have been digging through old paper records and painstakingly inventorying everything in the museum. Ritchie then inputs the information to a computer.

“We started last year with the first floor and we’re still not done,” she said.

Trustee Susan Barger does many of the displays.

The Grand Memorial building was dedicated in 1930. A post card shows the front lawn crowded with spiffy hat-wearing men and women in their Sunday best at the dedication. Stylish-looking cars from the era are parked on the street.

The building formerly served as the village administration building, with various offices and the mayor’s court. It once held a small jail and a library. Adams and Ritchie went to sixth grade in the building due to school overcrowding in the 1960s.

They point out photos of a home that sat on the site before Grant Memorial was built. At one time, the building’s basement still contained a well from the house.

Nearby, a display informs viewers about two railway lines that operated in Bethel until 1933. Another tells about Dr. William E. Thompson, who served the area as the nation’s oldest practitioner at age 102. Yet another educates about Edmund Burke, a Bethel native who made his fortune investing in New York real estate. Burke, who lived 1877-1966, gave a $500,000 endowment to Bethel for Burke Park and cemetery upkeep and a scholarship fund.

President Ulysses S. Grant’s father Jesse – the first mayor of Bethel – also is represented. A hollowed log that served as plumbing in his tannery and a grinding wheel are among artifacts.

Bethel was founded in 1815 by Obed Denham – and the museum holds the preacher’s bible as well as his wife’s wedding gown.

Other items of interest include a horse drawn sleigh and buggy, a wagon and trunks from the Civil War, a hand-made doll belonging to a small slave child, a sleigh blanket more than 200 years old, a wagon wheel maker so heavy it took six guys to move, and a desk with stationery and a bunk from a CCC camp formerly in the village.

A display highlights a baby shoe factory, run by a woman, which prospered in the town around 1907. One of the first washing machines, a wooden one made in 1881, sits nearby.

“We have just so many gems,” Adams said. “We are constantly learning. It’s fascinating.”

The second floor includes a military room with a variety of Civil War items such as a wooden leg, 126-pound mortar, swords, guns, ammo box and utensils. Displays salute veterans from both World Wars, as well as the Korean and Vietnam wars.  Another room contains a wealth of Bethel-Tate Schools items as well as every Bethel Journal dating to 1906.

And this is just a partial list of what there is to see. You’ll probably want to come back to absorb all the museum has to offer.

The museum is open 1-4 p.m. the first and third Saturdays of the month. Admission is free. One-year memberships are $10, three-year for $25 and lifetime for $75.