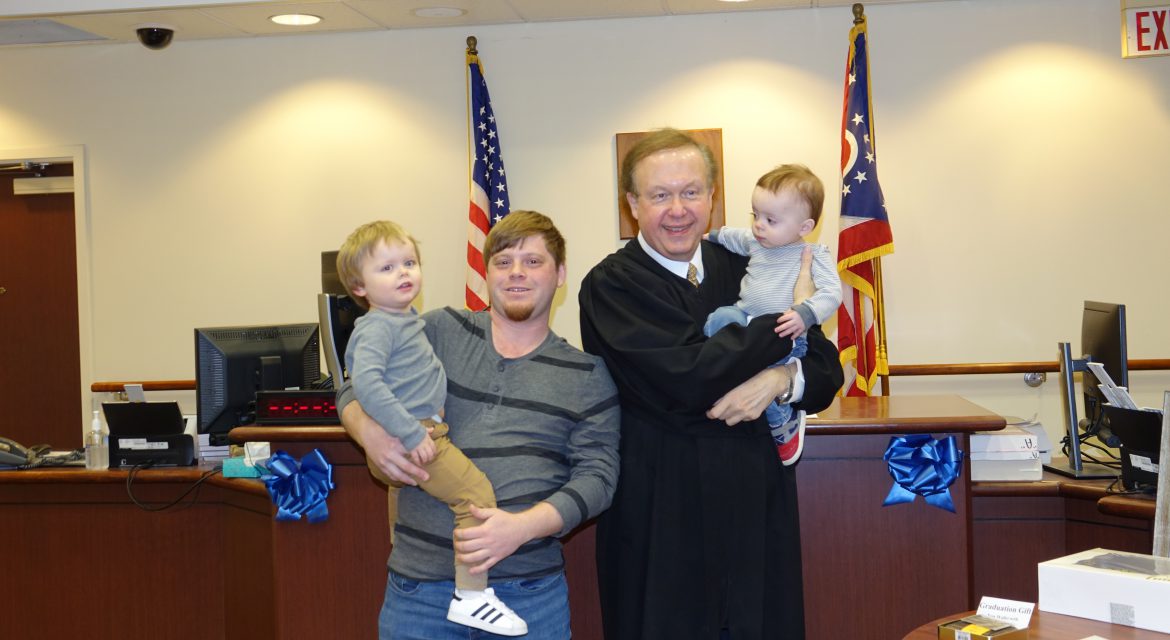 BATAVIA, OH — Jeffrey Gobeille, 28, made a life-changing decision when he chose to enter Clermont County Family Recovery Court in October 2020. On March 17, he fulfilled the requirements to graduate and entered into the 60-to-90-day exit phase of the program.

“It was the best thing for me to get my kids back,” said Gobeille, father of sons River, 2½, and Asher, 1. “Family Recovery Court offered what I needed, the guidance and support.”

Judge James Shriver asked Gobeille if he wanted to start Family Recovery Court during a review hearing on a Child Protective Services case.

“Judge Shriver had presented this to me a couple of months before, so I had time to think about it and said, yes, this was something I had to do,” Gobeille said.

On average, the program takes more than a year to complete. Families (couples or individuals) voluntarily enter Family Recovery Court. Requirements include attending frequent court hearings, Substance Use Disorder treatment, random and frequent drug screens, meetings with a case manager, calling and checking in regularly, attending AA or similar sober support meetings and getting a sponsor or mentor, having income, establishing housing, taking care of criminal matters and getting a driver’s license.

Gobeille recalls Angie Livesay, then the court’s administrator, explaining the program to him.

“It was like a blur,” he said. “It seemed overwhelming.”

Gobeille was required to check in with the court daily, do drug screenings two to three times per week, write a book report and provide written updates about sober support meetings. He participated in an outpatient treatment program at BrightView in Batavia, graduating at the start of 2022.

“In the beginning, Jeffrey was very quiet and reserved, but with each review hearing he opened up just a little bit each time,” Judge Shriver said. “Now he talks all the time and shares the ups and downs of parenting and what he has learned from his sober support meetings.”

Judge Shriver added: “Jeffrey is engaging and offers feedback and support to others in the program. Jeffrey enjoys the fellowship of this sober support meetings and lives his life by the principals in the Alcoholics Anonymous Big Book. Jeffrey’s commitment to recovery was strengthened even more when he reunified with his two children, River and Asher.”

Gobeille said his recovery program strengthened when he began attending recovery meetings in person, instead of online, in May of last year. He got a sponsor, formed sober friendships, and worked on his spirituality.

“I got the willingness to do what they suggested,” Goveille said. He’s been sober since May 29, 2021.

Gobeille gained custody of River and Asher in November 2021. He and the children live with his parents, who provide day care while he works as a medical service technician. He said parenting education from CPS and Child Focus has helped improve his parenting skills.

“I think River and Asher are better than ever and I’m doing really well,” he said. “I don’t want to sit here and be complacent. I want to continue to be better.”

Judge Shriver said: “Jeffrey has grown as a person, as a father, and as a person in recovery.”