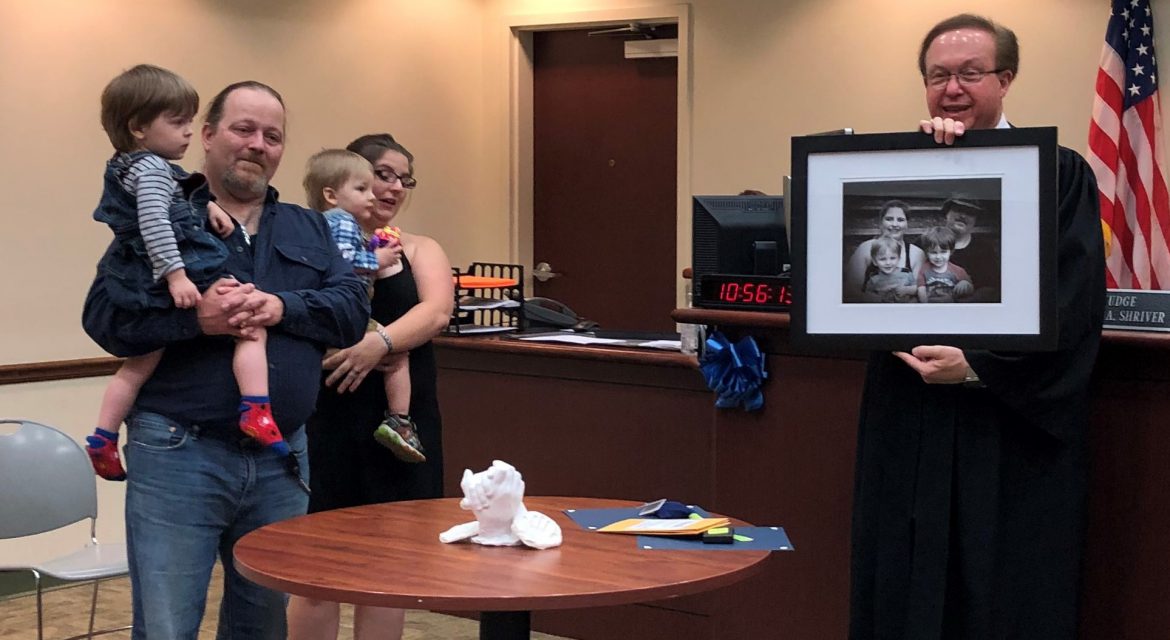 “We were scared because we knew that this program was intense,” said Sarah during a graduation ceremony a year and nine days later. She and Richard held their boys, Jacob, 2, and Tyler 1.

“Sarah maintained employment with the same employer and has advanced in her position at work,” Judge Shriver said. “Richard is a proud stay-at-home father and has shown patience and offers support to others in need.  Richard and Sarah have dealt with many challenges and personal struggles during their journey, but through determination and the support for each other they are now living as a family in recovery.”

The specialized docket under Judge Shriver was one of the first of its kind in southwestern Ohio when it started in 2014. Family Recovery Court was based on the drug court model, which emphasizes treatment over punishment.

On average, the program takes more than a year to complete. Families (couples or individuals) voluntarily enter Family Recovery Court.

Requirements include attending frequent court hearings, Substance Use Disorder treatment, random and frequent drug screens, meetings with a case manager, calling and checking in regularly, attending AA or similar sober support meetings and getting a sponsor or mentor, having income, establishing housing, taking care of criminal matters and getting a driver’s license.

“Sometimes it feels like you are drowning, but you are not,” Sarah said. “You are succeeding.”

Sarah and Richard got their children back from protective care more than eight months ago. They both have more than a year of sobriety. Sarah got her driver’s license back and Richard is working to do the same.

“You have done exceptionally well, despite all of the obstacles,” said Judge Shriver, before giving graduation gifts such as certificates of outstanding achievement, gift cards to Wal-Mart and Chick-Fil-A, a notebook with progress reports, and a framed family photo.

“We’re in the business of putting families back together,” he said, after showing the framed photo to the happy family.