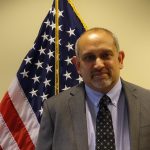 “The community development position in Clermont County is so important to our communities, and we did not take our search lightly,” said Claire Corcoran, President, Clermont County Board of County Commissioners. “Desmond hit the ground running in Clermont County, and his award demonstrates that we have much to gain from him.”

Community leaders praised Maaytah for his excellence in researching community issues and helping find solutions to them. They noted how he helped secure grants that led to successful programs and praised his compassion and drive to serve the community, as well as his strong interpersonal skills.

“Desmond Maaytah is a positive role model for leadership in the county for the homeless population and for survivors of domestic violence and human trafficking,” said Wendy Waters-Connell, Executive Director/CEO, YWCA Hamilton. “He is a role model of work ethic and determination to make his community stronger by connecting agencies and resources to leverage impact.”

According to its website, the OCCD confers the competitive and coveted Professional of the Year award to a community development professional in recognition of their work on a project or program that has had a major impact on their community.  Nominations are received from throughout the state.

Mindy Muller, president/CEO, Community Development Professionals, said: “Desmond has an innate ability to assess a situation and respond responsibly. He stewards the resources of the county with such care and caution while always looking for the best, most responsive and most impactful use of funds. “

Muller added: “Desmond is a humble individual who doesn’t seek the spotlight or recognition, but his leadership and role in bringing together the community partners, especially during a year of crisis, deserves recognition and celebration.”

“Desmond’s success validates the Clermont County Commissioners’ decision to bring him into our team,” said Michael McNamara, Director of Clermont County’s Department of Community and Economic Development.  “Our Commissioners want team members who care and who can get results, and Desmond Maaytah checks both of those boxes.”

Among Maaytah’s duties in Clermont County is overseeing the administration of the county’s CDBG program which distributes about $1 million of federal funds each year to projects in our low-to-moderate income areas. The Community Development Division is in the Department of Community and Economic Development. As the division evolves, it will begin seeking new grant opportunities to leverage on behalf of our communities.

The Community Development Professional of the Year award will be conferred during the OCCD annual meeting this week.