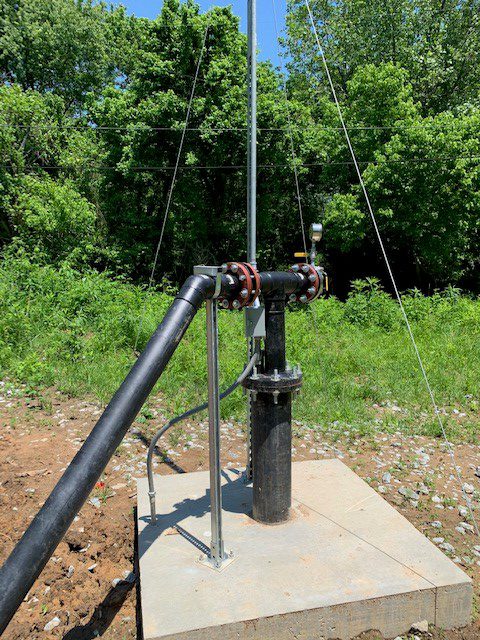 A second interceptor well is being constructed at the Beckjord Power Station site in New Richmond. The well will serve as a backup in case the original interceptor well fails. Operation of the well, which helps protect county-owned drinking water wells from contamination, is expected soon.

In the early to mid-1990’s, Cincinnati Gas & Electric (aka Duke Energy) performed an investigation of the groundwater near the Beckjord Power Station.  As a result of the investigation, an elevated-sulfate groundwater plume was identified.  This plume originates from the power station’s ash ponds and extends towards the County-owned drinking water well fields that provide the raw water for the County’s P.U.B. Water Treatment Plant.  In order to help protect the County’s drinking water wells, Duke Energy installed an interceptor well to capture the sulfate plume.  The interceptor well initiated pumping on Feb. 4, 1994 and continuously removes groundwater with elevated sulfate concentrations and discharges it to the Ohio River under an NPDES Permit issued by the Ohio Environmental Protection Agency (OEPA).

Since the installation of the interceptor well in 1994, quarterly groundwater monitoring reports have been submitted to OEPA, with copies sent to Clermont County.  These reports present and summarize analytical results from about 30 monitoring wells and piezometers located across the Beckjord property.  Within the reports, sulfate concentrations are used to monitor the movement and location of the contaminated groundwater plume.

In 2014, Duke Energy shut down the Beckjord Power Station.  Then, in early 2018, ownership of the Beckjord Power Station property was transferred from Duke Energy to New Richmond Development Corporation (NRDC).  Since then, NRDC has been working to decommission the former power station in accordance with Ohio EPA requirements.  NRDC continues to operate and maintain the interceptor well and submit quarterly groundwater monitoring reports to Ohio EPA and Clermont County.