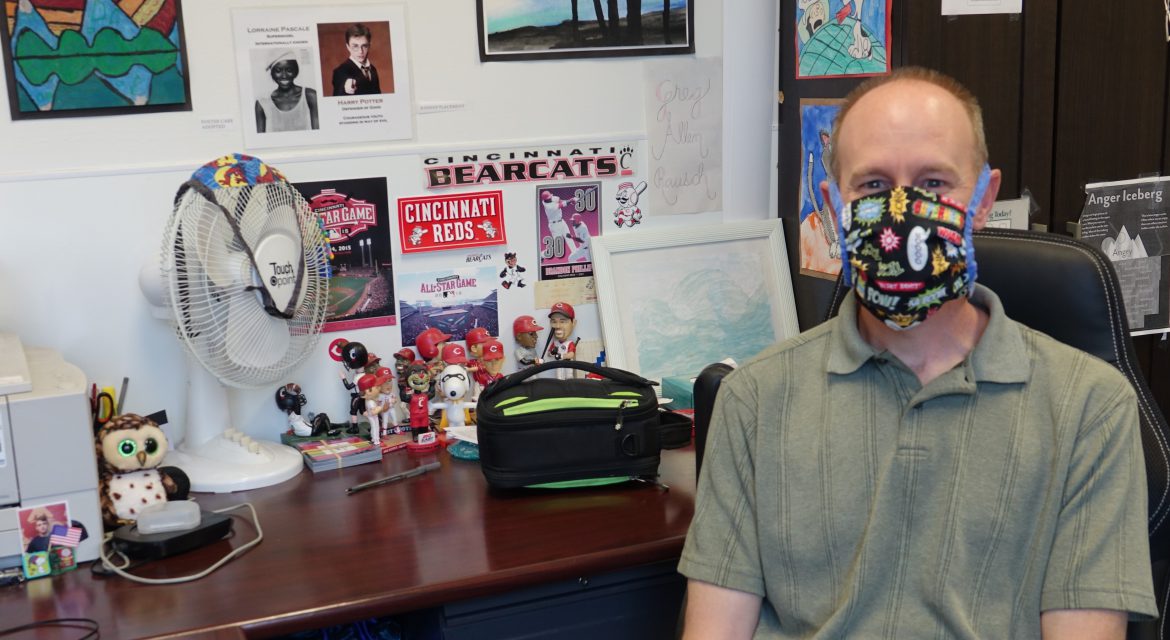 BATAVIA, OH — When the pandemic started, clinical social worker Greg Rausch wondered about his future. For more than 13 years, he has been embedded in Clermont County Children’s Protective (CPS) offices in Batavia. He provides mental health counseling to kids in foster care, adoption or nearing adoption.

“When COVID hit and everyone began to shut down, I was really worried that my time here was about to come to an end because I wasn’t sure I could engage enough clients through video to make it work, and I wasn’t sure case workers would remember I was around and still make referrals,” said Rausch, who has worked for The Counseling Source for 21 years.

“This allowed us to assess risk and needs better and build and maintain relationships with families and caretakers,” said Dick, now director of Clermont County Department of Job and Family Services. Tina Pocock continued the in person sessions when she became CPS director.

Rausch said in a thank you email to Pocock that “being physically present was such a huge blessing not only to me but to my clients as well.”

“I can’t tell you the number of people over the past year who expressed being so thankful they were still able to come in person,” he said. “Client after client and family after family voiced how important it was to them at a time when their relationships were being cut off at every corner. Additionally, not only did case workers not forget I was around, they actually increased their referrals as they knew there was someone on the other end of the referral that would be able to see the kids.”

Rausch and his clients wear masks and stay socially distanced. He cleans his office and waiting room with disinfectant after each visit.

“Greg was innovative in his methods,” said Angie Rutherford, CPS supervisor. “I would often see him outside walking the grounds with a client and demonstrating safety practices such as masks, while still being able to have face-to-face contacts. The clients are given a safe space to make disclosures that would have been stifled by teleconference. The face-to-face therapy he conducted through this trying time provided high-quality services for his client population.”

A clinical social worker for 21 years, Rausch usually sees individuals or families once per week for an hour. Sessions can continue for a few weeks to more than a year, depending on needs. Kids range in age from 3 to 18 and beyond. The oldest is now 22, and he has had one as old as 24. (“Some still want to come in to process what they went through as a teen or a child,” he said.) Birth or adoptive family members or siblings can be at sessions, as well as subgroups like a foster mother and child.

Children typically have faced a lot of trauma stemming from abuse or substance abuse of family members. They struggle with depression, anxiety, anger and/or behavioral problems.

Rausch interacts with his clients in a variety of ways. Younger children may engage in play or art therapy. Teens like to talk while walking outside or shooting a basketball. (“You meet kids where they are and work with them in the way they’re comfortable with,” he said.)

The greatest reward comes when kids in foster care reunite with their birth families, Rausch said. That’s followed closely by kids who are adopted. Many invite him to their adoption ceremonies so he can witness the finalizations.

Ryan Patton was first introduced to Rausch about five years ago, when his first foster son was placed in his home. Patton quickly realized Rausch was a compassionate and caring person toward his clients and their families. Rausch was able to pay close attention to the smallest of details due to his natural ability to actively listen to what the client was saying and sometimes what they weren’t saying.

“He is an excellent counselor and is generally a wonderful person,” Patton said. “He has helped me on numerous occasions when things weren’t going well within my family/home. He has been able to provide me with different tools and resources to use as it relates to my family. My herd, which now consists of two adoptive sons and two foster children have either seen or sees Rausch currently.

According to Patton’s youngest son, Rausch is a good counselor: “He is always willing to listen and always knows how to fix a problem in our herd and has helped us multiple times. All of my brothers have been through Greg, and no complaints have been made. He will be supportive and will give you the respect you deserve. Greg always goes the extra mile to try to keep you on track and will even go out of his way to help you out if you need some help or if it is an emergency at the end of the day Greg Rausch is an amazing counselor and is definitely better than all the other ones I have had by far.”

Rausch thanks former CPS Director Anne Arbaugh for housing him in the department’s offices back 2008. This eliminated the need for families to go elsewhere and gave him the opportunity to easily interact with nearby case workers.

In addition to the in person sessions, Rausch does counseling via telephone and video. He first piloted video seven years ago.

“Some families appreciate that,” he said. “It’s a service I can do as well.”

Virtual appointments allow therapists to stay with children for longer periods, preventing another disruption in their lives.

“I’ve had kids with double-digit placements,” he said. “If I can stick with them, even if they’re in Cleveland or Columbus, they will not have that extra loss.”

But, overall, face-to-face appointments have proven most effective.

“I’ve had many children and families express thanks that they could be there in person,” Rausch said. “Both children and adults, really appreciate it.”