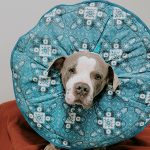 The Animal Shelter became involved after receiving a call from a concerned citizen who had brought two stray pit bull mixes into her home due to inclement weather. The dogs, both over 2 years old, appeared to be siblings.

A neighbor had shot John Wick with a 45-caliber gun after he attacked her cat.

“The dog is friendly with people,” said Caleb Peterson, the shelter’s director. “But his natural prey instinct most likely led him to the cat.”

Deputy Dog Warden Aaron Horsley crawled under a porch to retrieve the injured John Wick. He took the dog to an animal hospital. Miraculously, no vital organs had been hit.

The shelter paid the hospital bill of almost $2,000.

Peterson reports that John Wick has been “sweet, interacting with everyone” while recovering at the shelter. He will remain at the shelter for the next couple of weeks, until drains and sutures are removed.

“We could have euthanized the dog, but we continue to strive to be a no-kill shelter,” Peterson said. “We do everything we can to prevent euthanasia, and have been 100 percent successful since opening on Jan. 1.”