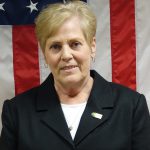 She brings 19 years of experience as a Pierce Township trustee, the past eight as president of the Clermont County Township Association.

Her background also includes a 14-year stint as the EMS Chief of the Pierce Township Volunteer Fire Department. She also serves on the Board of Directors for Clermont County Community Services and the Senior Service Housing Board. She is a member of the Clermont County Law Enforcement Appreciation Selection Committee and the Ohio Public Works Commission grant committee.

“Somebody has to step up and do these things,” said Batchler, who joined the Board of County Commissioners on Jan. 1. “To me, this is one of the ways I can help the community. That’s why I ran for this position. I like working with people, have a knowledge of local government and how it’s run, and want to step in and help the county move ahead.”

“We had both been with the volunteer fire department and served as an EMT and trustee,” she said. “It’s only fitting that my next step would be commissioner.”

To prepare for her new post, she met individually with Humphrey and Commissioners David Painter and Claire Corcoran and former Commissioner Bob Proud. She also attended Commissioners meetings and observed executive sessions during the final six weeks of 2020.

Over the years, she has developed many productive relationships while working toward goals such as a communications center for the county.

“I know people’s needs and I know the people,” Batchler said. “I’m not coming in a as a stranger.”

Batchler said public safety remains a top priority. She cited her years in public safety and the fact that two of her daughter-in-laws are police officers.

Batchler also wants to help individuals and businesses who are struggling due to the pandemic.

“I look forward to getting back to a normal way of life and getting restaurants opened up,” she said. “My grandson, he wants to get back to school.”

In addition to her career in public services, Batchler possesses 43 years of experience working in private industry. After seven years at Cintas, she embarked on a 36-year career at Senco Products. She retired as a Senior Credit Analyst.

“I learned a lot about working with people, decision making and finance during a long, wonderful career at Senco,” she said. “I’m a people person. I like dealing with them. I also believe in focusing on the positives.”

Batchler draws on a foundation set by her parents, who moved to the area from Berea, Ky., when she was 2.

“Most of my life, I remember living in the nice little town of Bethel,” she said. “My mom and dad were both country. That’s how I was brought up.”

Her mom passed away a month before she became a township trustee; her dad, 15 years ago. She also has a brother who lives in Goshen and another who is deceased.

In May, she celebrates 26 years of marriage to her husband Mike, owner of Batchler Heating Services. They have two children and seven grandchildren.

Batchler has seen a lot of change during her years living in Clermont County. For example, the Pierce Township Fire Department did 100 runs per year when she first moved there in the early 1980s. Now, it does 300 per month. She has seen much development in the eastern portions of the county.

“It’s nice to see progress in the right way,” she said. “You’ve got to move with the times. I’m looking forward to helping the county move ahead and serving the citizens of Clermont County.”