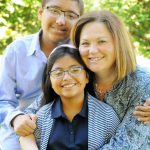 BATAVIA, OH – Theresa Ellison brings more than 25 years of serving families into her new role of assistant director in charge of Clermont County Child Support. The Board of County Commissioners approved her promotion on Dec. 16.

“I believe strongly in the mission of our agency, which is to ensure that the children of our community receive the support they need and deserve,” Ellison said. “I am so excited to get started as the new deputy director, and I appreciate the confidence that Tim Dick (director of the Clermont County Department of Job and Family Services) and the Commissioners have shown in promoting me to the position.”

Dick cited Ellison’s education, leadership and demeanor as key attributes. He noted that the division collects $36 million yearly on behalf of 46,000 individuals.

Ellison has worked for Clermont County for almost 27 years. She began my career in 1994 as a staff attorney for Child Support Enforcement. In 1995, she was hired by Judge Voris as a magistrate for Domestic Relations Court and she remained in that position until returning as the lead attorney of the Child Support Division in 1997.