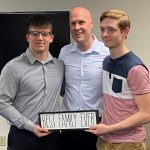 BATAVIA, OH (Oct. 22, 2020) — Ryan Patton, 42, of Union Township has always liked working with kids. But he says his step into parenting – adopting two teen-age boys – came as somewhat of a fluke.

Patton has served as a school resource officer for the Clermont County Sheriff’s Office the past 12 years. He has been at Clermont Northeastern School District for two years, after serving Amelia schools for about a decade. Before then, he did road patrol duty for the Sheriff’s Office for eight years. While carrying out their job of protecting buildings and enforcing laws, school resource officers build relationships with students and staff.

Back in September 2016, he knew Brad, who he would eventually adopt, from his work at the school. Brad, then 13, had been missing from school for two months.

Brad’s caseworker at Clermont County Children’s Protective Services called Patton to say that they had found him at juvenile court. Patton jokingly told the caseworker he wished he had his foster parent license so he could take in Brad.

Children’s Protective offered to work out an arrangement where Patton could became a guardian and care for Brad as a kinship care provider.

After a weekend of consideration, Patton agreed to the plan.

“I’m 37 or 38 and taking on a teenager,” Patton said. “I had lived alone, and was a creature of habit. The first day, I almost burned the house down while making hamburgers and fries.”

Nick, 15, joined the household in January 2018. Patton had known him from school, too – from going with probation officers to pick him up for not attending.

“I had just gotten my license for foster parenting and his current placement was not working out,” Patton said. “It’s kind of a funny story because I only had a first name and didn’t know if I wanted to take on a stranger. I asked Brad, who said, ‘yeah, let’s give it a try.’ Then, it turned out I knew I knew him.”

Teens are harder to place, as many people want to foster or adopt younger children. They also had two teenage foster sons live with them for a time.

Patton describes parenting teen boys as a roller coaster ride. Some days, you want to get off the ride, but overall you thoroughly enjoy it.

He said that parenting training offered through Children’s Protective has helped. For one, he’s learned some children are more receptive to more authoritarian parents and accept that “no is no,” while others respond better to an explanation but will at times want to argue and plead their case.

Support and advice from his mom also helps.

“I work with kids all day, but working with kids and raising two kids are two different things,” he said. And teens from the Children’s Protective system bring issues, such as abandonment, which can complicate the process.

“I have nothing but good things to say about Children’s Protective Services,” Patton says. “They’re very personable and professional. They do a great job. If they’re not able to answer a question, they’ll do a phone conference with someone who can help with the issue.”

Brad and Nick have become very close – brothers in every sense of the word.

“We call ourselves a herd,” Patton says.

“His graduation was a big thing, considering that he never used to be in school,” Patton said.

Another milestone took place in 2020. In February of this year, Brad wanted to take on the Patton name, so an adoption took place.

Nick, in his sophomore year at Clermont Northeastern, was adopted in August. He just got his temporary driving permit and loves wrestling.

“Again, he was one who never went to school,” Patton said. “We go to school in my house. He understands that.”

And from there, it’s not a fluke: The possibilities are endless.

Adoptive parents needed
Boys and girls of varying ages, ethnicities, and backgrounds are waiting to be adopted. Many of children are siblings who deserve to be adopted together. Visit Clermont for Kids
###