From homelessness to recovery: Program reunites family of eight 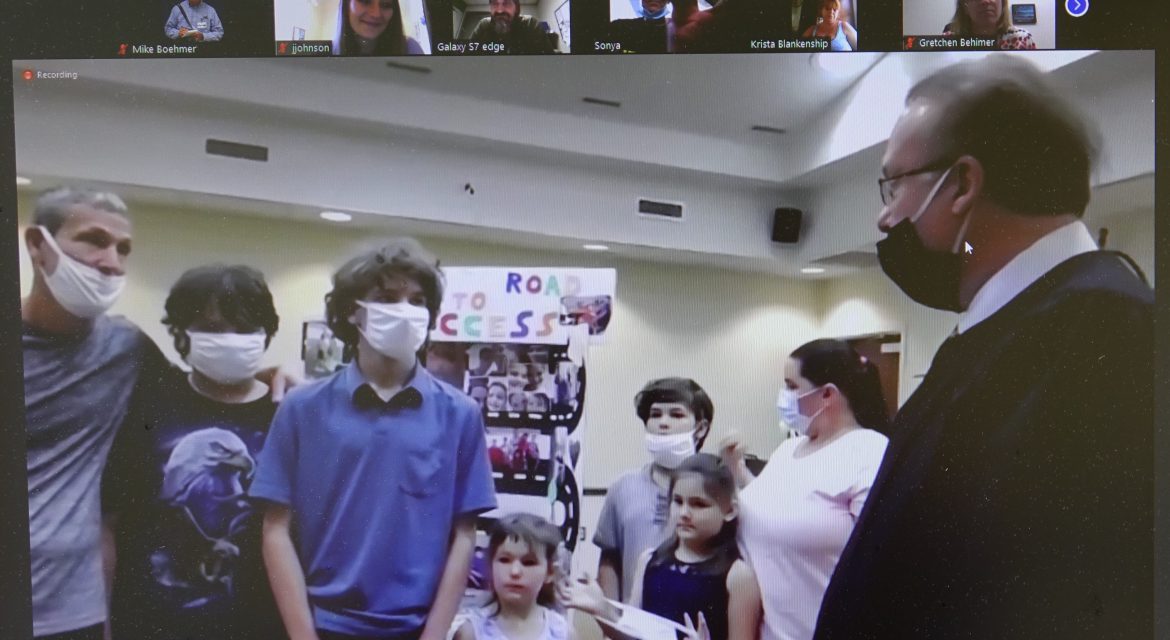 BATAVIA, OH (June 12, 2020) — Robert Schubert and wife Christina Northern – the parents of six children, ages 15 to 20 months – had lived in a van in back of a Clermont County sandwich shop for 18 months when they came to Family Recovery Court. He signed up for the rigorous year-long program on Aug. 21, 2018, and she joined about a month later.

Addiction to methamphetamine knocked them down to the point that their children were placed in foster care on Oct. 17, 2017.

Thanks to the structure and support of Family Recovery Court (a part of Clermont County Juvenile Court), they regained custody of their children on Sept. 27, 2019. Robert has been sober since Aug. 15, 2018, and Christina, June 17, 2018.

On June 11, the six children joined their parents at a virtual/in-person graduation ceremony at the court. Thomas, 15, Landen, 13, Ethan, 10, Zelia, 8, Hailey, 5, and Lily, 20 months, watched as Judge James A. Shriver praised the family, wearing masks due to COVID-19. Family members and case workers watched online via Zoom.

“We had a chance to graduate virtually earlier, but we waited for the extra time to thank him face-to-face,” Robert said.

On average, the program takes more than a year to complete. Families (couples or individuals) voluntarily enter Family Recovery Court.

Requirements include attending frequent court hearings, Substance Use Disorder treatment, random and frequent drug screens, meetings with a case manager, calling and checking in regularly, attending AA or similar sober support meetings and getting a sponsor or mentor, having income, establishing housing, taking care of criminal matters and getting a driver’s license.

“Even though it was tough, I liked the program and its structure a lot,” Robert said.

“It was definitely a challenge,” Robert said. “They kept us going. When you stop using drugs, you’re starting a new life.”

The couple also needed to find a residence, a difficult task due to an eviction and two prior drug convictions.

A case manager helped the family find a 2-bedroom apartment – their home for almost two years. The program helped with the first month of rent, deposit and gas cards. Three boys are in one bedroom, three girls in another, and the parents have a bed in the living room.

They kept the kids in school in Fayetteville, about 45 minutes away, because they’re doing so well there. All have earned “student of the week” or “student of the month” awards since returning to their care.

“It hasn’t been easy, but we’re probably better off now than we have ever been,” Robert said. “All of our bills are paid. We’re maintaining a home. We’re building a nest egg to get a home closer to the school.”

“When they came to Family Recovery Court, they were homeless. They have an extensive history of drug use including a variety of substances,” Judge Shriver said. “They have both maintained employment, secured housing, regained custody of their children, completed treatment requirements and are both celebrating more than 18 months of sobriety. They have complied with all other program requirements and Recovery Court officials are so proud of their progress. Since their children have returned to their home, they have shared photos with the court of celebrating holidays and spending time in nature, which they love to do.”