Best of both worlds: Kids and environment education 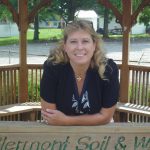 Judy Krebs, Clermont Soil & Water Conservation District’s education coordinator, touched many lives during her 31 years of service. We caught up with Judy before her Jan. 31 retirement.

What did your job entail?  “Well, my title is Education Coordinator. Teachers in any Clermont County school can request programs that I offer on many kinds of environmental education. I will go into their schools and classrooms and teach those programs to the students. They are often hands-on and fun, but also meet many of the Ohio Education Learning Standards for many different grade levels. I also have a contract with the Adams-Clermont Solid Waste District to teach about solid waste reduction and recycling in Clermont County schools.”

What did you like most about your job?  “Gosh, there are so many to talk about. My job was so fulfilling to me. I can’t imagine doing anything else with my life in the past 31 years. I love kids and I love environment education and so I had the best of both worlds. Developing relationships with the students and teachers was the greatest. Teachers tell me I missed my calling and should have been a formal educator, but I loved going to the different schools. These students and teachers became part of my family. I would return to my office and after the students heard my presentations they would contemplate and then their teacher would send me an e-mail with more questions that they had. That’s how I know I was able to reach those students and make education fun. Below is an e-mail I received from a teacher after I returned from a program at their school.

I collected students’ questions from today. They included:

Thank you for a great presentation! The kids loved it very much.”

“Another highlight was creating the Augmented Reality Sandbox. I wrote a Duke Energy Foundation Grant to have it built. It was a dream and a nightmare as it was very complicated to get it calibrated. It took me a year and a half but I finally got it finished. The AR Sandbox uses a 3D Kinect camera to scan a 3D shape of the sand surface in real-time, and additionally to detect hand gestures above the surface of the sand to create ‘virtual reality clouds.’ A computer located under the sandbox collects the data from  the camera and projects that image through a projector that is located on the AR Sandbox’s arm. That data is then projected on the sand surface in real-time. It can teach young students how to read a topography map in ten minutes because those topography lines move every time they change the shape of the sand.

“The many relationships I developed over the years with students and teachers is truly one of the biggest highlights.”

Why did you enter this type of work?  “Well when I started with the Clermont SWCD, I was hired as the secretary for the District. I loved kids and education and went to my Board and asked if we could create an Environmental Education program. We had no such position back then. I started out doing part-time my first year with the District but it soon became overwhelming and I started teaching environmental education full time my second year with the District. Again, as I stated before, I can’t imagine doing anything else with my life.”

How did I end up with the Clermont Soil and Water Conservation District?  “Well, 31 years ago I was the Corporate Secretary for the President and Vice-President of Keystone General. It was a military contract company located in Sharonville. I was going to be getting married that year and wanted a job closer to home. I applied for the secretary position for the District and on my way home from the interview, I receive a call from the District Administrator, offering me the position. He always joked about getting me for .06 cents more an hour.”

How have things changed over the years?  “Wow, I don’t know where to begin because everything has changed. When I first started with the District, not many people even knew what Clermont SWCD was or did. The job environment was so much more ‘laid back.’ You could talk to people when you were out on a site visit and not worry about not being able to get your work finished at the office when you got back.  There is so much more work to do now than there was back then. Not just site visits but also so much more paperwork. Times have really changed when it comes to accountability for your job. Also, people who are not in the farming business now know who we are and what we do.”

What plans do you have for retirement?  “Well, I don’t have any yet because I didn’t expect to be retiring for another year. It has taken two weeks to sink in. I am the POA for my mom and dad and they are not in the best of health so much of my time will be spent helping them and taking care of their small farm.”

Anything else you would like to add?  “Well, this retirement thing is still sinking in. I cried for the first week and a half every time I went to do a presentation in a school. I will miss the students and the teachers so much. As I have said before, I just can’t imagine a more fulfilling and wonderful job to have for the last 31 years.”