Adoption Success Story: “It’s like everything that happened was meant to be” 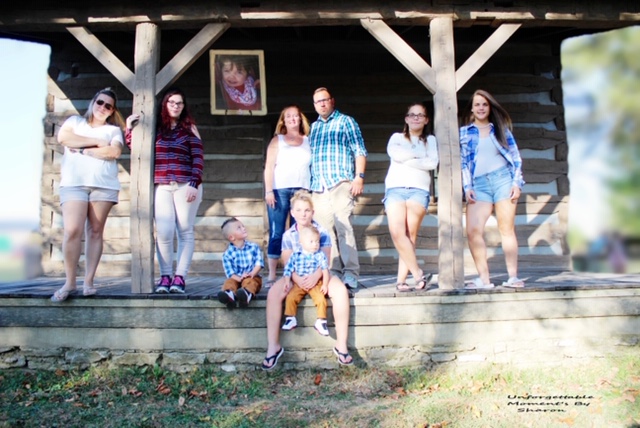 The Tudor family poses for a family photo. If you're interested in adoption or foster care, please visit clermontforkids.org
By Mike Boehmer

BATAVIA, OH (Oct. 28, 2019) — Phil and Angel Tudor marvel as they look back on their lives as adoptive parents. At one point, they just had shared custody of Phil’s daughter, Brooklynn, now 27, seeing her every other week. Six years later, their family accelerated to eight children.

“I always thought I’d be old and gray with no kids,” said Angel, 43, of Goshen Township.

Clermont County Child Protective Services placed the four sisters with the Tudors on Aug. 5, 2009, as foster children. The day the girls were placed, the county told Angel they would have to split the sibling group in half if the Tudors didn’t foster all four. She agreed, without first speaking with Phil. “She knew I would say yes,” Phil said. The adoption was finalized on June 15, 2011.

Phil and Angel decided to adopt after unsuccessfully trying for 17 years to give birth to their own children.

But six months after adopting the girls, Angel found out she was pregnant. She gave birth to Ava, in 2012. Ava lived with a genetic disease that required her to have a tracheotomy and ventilator. She passed away in January 2018 after complications from her fourth open heart surgery.

CJ came into the family in June 2018, as a kinship placement from Brown County. CJ has a genetic syndrome that requires him to receive nutrition through a G-tube.

Word of the family’s ability to care for a special needs child spread through a Facebook page called Ava’s Army, set up to raise funds for Cincinnati Children’s Hospital Medical Center.

The Tudors are currently adopting CJ, although he is already a huge part of the family despite an official birth certificate.

Phil believes his life as a parent has helped him learn to deal with PTSD from a career in the military, including tours in war zones. He got an honorable discharge to help his mom battle cancer for a number of years.

Before a stint as a subcontractor for an auto manufacturer, he became a stay-at-home dad. Angel held a corporate job involving travel to manage seven locations before the position was terminated in 2014.

Phil and Angel appreciate the support of family and nurses as they carry on their busy lives.  They’re thankful for the joys and challenges of parenthood.

“It’s like everything that happened was meant to be,” said Phil, as Angel and the girls smiled in agreement.

For information about adoption and foster care, please visit: clermontforkids.org