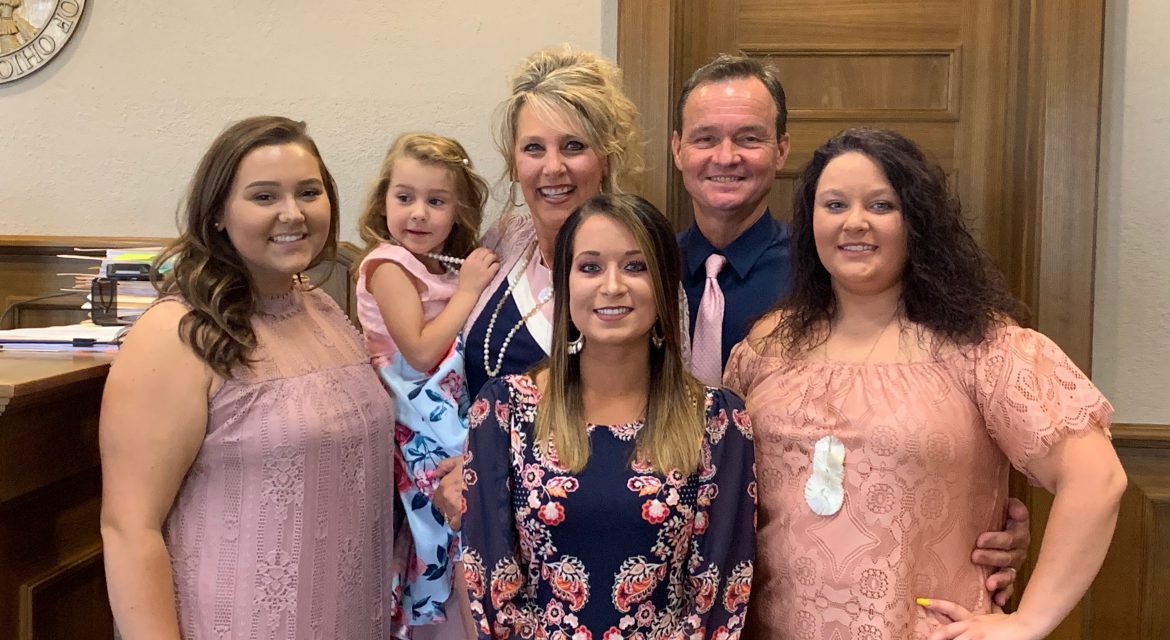 She spoke about life in a family with two parents who ended up dying from drug overdoses and her many placements in foster care and a residential center in Adams County. She shared about meeting her adoptive parents, Bobbi and her husband Chris Grooms, through their oldest daughter, Lizzy, when they both worked at a local restaurant. They had adopted Lizzy at a young age.

“As difficult as things were and as closed off as I had become during my teen years, the Grooms family never gave up on me,” Jerica said. “They accepted me as part of their family and helped me, emotionally and financially, throughout my emancipation, through college and continue to help support me emotionally, into adulthood.”

In July 2015, Jerica legally accepted their name as her own:  Jerica Estle-Grooms.  “Because of their support, I graduated with my bachelor’s degree in Business from Marshall University in Huntington, West Virginia, in December 2018,” she said. In July, she began work at TQL. (Read her full Senate testimony, below, and watch a video of the House speech here.)

Jerica will receive the Youth Leadership of the Year award from the Public Children Services Association of Ohio (PCSAO) this week for her advocacy work on behalf of foster youth.

Bobbi, a Clermont County adoption worker, and her husband Chris adopted Jerica at 18 years old and Elizabeth “Lizzy,” also 23, at three months old. They also adopted Haven, 4, and have a birth daughter, Caley, 20. Haven has lived with the family since age 2.

“What a ride it has been,” Bobbi said. “Our goal had been to be foster parents. You never know who will walk through your door and what their needs are. We were foster parents first to those we adopted. It was never my goal to adopt. Never say never.”

They had been foster parenting for Brown County for four years when Lizzy joined the family on April 19, 1996. Her adoption was finalized on Dec. 15, 1999, just over three months after Caley was born on Sept. 4, 1999.

The Grooms family has had 16 foster children over the years. Outside of the three they’ve adopted, the others have reunified with family members. Reunification efforts can last up to two years.

“It takes patience and an open mind,” said Jordan, a Clermont County adoption supervisor for many years. “We always want to reunify youth with their birth families when it is in their best interest. I’ve seen Bobbi happy when her foster children are going home.”

“I cry and cry and cry,” Bobbi said. “I’m so happy for them. But it’s always difficult to say ‘good-bye’. It’s always nice when we have continued visits after reunification.”

The requirements to become a foster parent are very similar to becoming an adoptive parent.

As of this writing, 15 youth in Clermont County were in need of permanent homes. Visit clermontforkids.org for information about foster care and adoption.

“There is a need for foster/adoptive families for all ages, but particularly for sibling groups and older youth,” Jordan said. “A lot of people think that youth at age 18 are ready to fly on their own. They’re not. The odds are against them, without needed support.”

The Grooms family met Jerica through her work at Frisch’s restaurant with Lizzy. Both were 17 and high school cheerleaders and athletes.

“When we decide to adopt, everyone in our family’s onboard,” Bobbi said. “They have to be. It’s a big responsibility, a big commitment. It’s not for a day, a week or a month. It’s for a lifetime. You can’t turn your back on them.”

As Jerica testified: “Many children who age out or emancipate from the foster care system, without permanency, face the reality of homelessness, poor education, early pregnancy, inappropriate relationships, increased rates of mental illness and joblessness.  Through no fault of their own, I know that if I had remained with my biological family, I would never have received the encouragement or support I needed to attend and graduate from college.

“My agency and my family (the Grooms) were able to provide these supports for me.”

Good Morning, Chairman Hackett, Vice-Chair Huffman, Ranking Member Thomas, and members of the Committee.  My name is Jerica Estle-Grooms.  I am 22 years old. Growing up with my biological family who were addicted to drugs, you can only imagine the things that I witnessed. Imagine walking in from school as a young child witnessing both parents stumbling because they’re so high while wondering why there was prescription bottles and needles laying on the table. The electric was shut off. The water was shut off. There were times that we didn’t have food because my parents’ addictions came before our basic needs. My mother died of a drug overdose in 2008.  A month after my mother’s death at the age of 12, I, along with my twin brother, and our older two siblings entered foster care due to issues within our primary family.  One year later, my father died in 2009 also due to a drug overdose.  During my stay in foster care, I was in eight placements from 2008-2014. I lived at Wilson Children’s Home (a children’s residential center) in Adams County, Ohio, on four separate occasions along with several kinship and foster care placements. The last home is where I emancipated.

It wasn’t until I was 18, that I met my “family,” Chris and Bobbi Grooms of West Union, Ohio.  I met the Grooms’ family through their oldest daughter, Lizzy, when we both worked at a local restaurant.  Chris and Bobbi (known to me as “dad and mom”) were previous foster parents and had adopted Lizzy from foster care when she was a young child.  Bobbi is also a social worker and has experience as an adoption worker in the public child welfare system.  As difficult as things were and as closed off as I had become during my teen years, the Grooms family never gave up on me.  They accepted me as part of their family and helped me, emotionally and financially, throughout my emancipation, through college and continue to help support me emotionally, into adulthood.  My mom and dad also helped re-establish relationships with biological family members and with my twin brother.  In July 2015, I legally accepted their name as my own:  Jerica Estle-Grooms.  Because of their support, I graduated with my bachelor’s degree in Business from Marshall University in Huntington, West Virginia, in December 2018.

Many people, including caseworkers, supervisors, directors, etc., have referred to me as a success story.  What you may not realize is, that in foster care, it can be difficult to form attachments, to make connections and to have the support of family into adulthood.  Many children who age out or emancipate from the foster care system, without permanency, face the reality of homelessness, poor education, early pregnancy, inappropriate relationships, increased rates of mental illness and joblessness.  Through no fault of their own, I know that if I had remained with my biological family, I would never have received the encouragement or support I needed to attend and graduate from college.

My agency and my family (the Grooms’) were able to provide these supports for me. My kinship placements came to be as a result of meeting people within the community during my high school years, where I was able to participate as a cheerleader, homecoming queen and work a job at local restaurants.  These activities helped me develop connections with teachers, coaches and other community members that would encourage me to succeed and to not give up on my dreams in life!

I was supported and encouraged by my caseworkers and other staff of Adams County Children Services with working, attending school, graduating high school, going to prom, getting my driver’s license, opening a bank account, earning money, completing chores, and many other experiences “normal” children (meaning children not in the child welfare system), get to experience growing up.  Adams County Children Services even purchased items for me for my dorm room when I entered my freshman year and caseworkers collected snacks and other items for me at their own expense, as well.

To this day, if I need anything (documentation, encouragement, whatever it may be), I can go to the agency or call my caseworker and get the help I need.  Prior to graduation and since graduation, I have stopped by many times, just to say “thank you” to the staff at Adams County Children Services, who truly care about me (even when I didn’t understand that they did) and were so happy and proud to see me succeed in life.  They can understand how hard it is for kids and young adults in my situation to navigate through life without the proper supports.

Many children in foster care that I have met throughout my life, don’t always share the accomplishments and opportunities that I have had.  Theirs are often stories of struggle, pain and despair.  No matter the situation, it always seemed to come back to that individual not having the appropriate people or supports to rely on.  I’m so thankful, as this could have been ME, as well.

Ohio ranks last in the nation for support of local children’s services. Only 51 of Ohio’s 88 counties have levies to generate local funding for services. In counties without them, services are limited or simply unavailable. And in recent years, thousands more children are in need of services in large part because of the state’s opioid crisis.  I AM TRULY the face of this tragic epidemic.  I NOT ONLY lost one parent, I lost BOTH.

Many other children across Ohio, just like me, are counting on you to support Child Welfare Agencies at the state and county level.  If made available, this funding could be used to provide the necessary services which will allow more children who emancipate from foster care the opportunity to succeed and not become a burden on taxpayers.  Additionally, it can provide the necessary assistance to recruit more foster/adoptive homes for those children still waiting for permanency within the state child welfare system and provide more options for children who have yet to find their forever home.

PLEASE, remember my story as you consider the children services proposals included in Governor DeWine’s budget.  These additional dollars are needed so more youth in Ohio can have additional support and opportunities that I did.