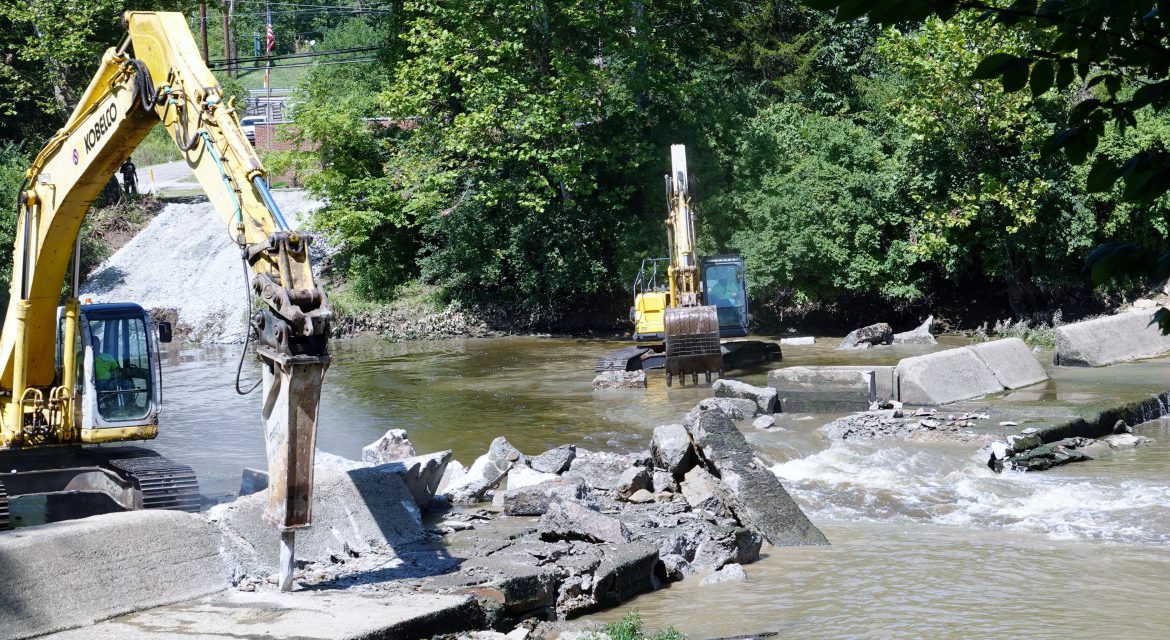 Crews remove low-head dam, which has impeded the river since the 1940s
By Mike Boehmer

Thanks to the efforts of the Valley View Foundation, Clermont Soil & Water Conservation District (SWCD) and the Village of Batavia, the segment of the East Fork Little of the Miami River that flows through the heart of Batavia has been restored to a more natural state following the removal of a low-head dam, which has impeded the river since the 1940s.

Similar to other Depression-era dams built across the nation, the Batavia dam was constructed to provide a local water source. Batavia ceased utilizing the dam for such purposes years ago and the defunct structure remained imbedded in the river, degrading habitat and posing a significant threat to the public.

Low-head dams can be dangerous, as people who recreate on or near the structures risk injury and drowning. Dubbed as “drowning machines” because of the turbulent, circulating waters that can trap people at the toe of the dam, many communities are opting to remove these structures to improve public safety. Over the last 30 years, 50+ dams have been removed across Ohio, including two dams in the East Fork watershed; one located on the East Fork Little Miami River in the Village of Williamsburg and another on Solomon Run, an East Fork tributary near Fayetteville.

Activities to remove the dam began with a notching of the structure on Sept.  4 to lower river levels and relocate mussels found behind the dam and along the newly exposed banks.

Removal of the dam is now complete and instream restoration is in the works.

Upon completion of the project later this month, Clermont County residents will enjoy safer recreation along the river and the East Fork will flow freely for 20 miles to its confluence with the Little Miami River near Milford.