BATAVIA, Ohio — Bold but deliberate decisions by Clermont County officials in 2005 continued to pay off 14 years later when Total Quality Logistics (TQL) announced plans to construct a second building at Ivy Pointe Boulevard in Union Township. The expansion will accommodate nearly 600 new employees that the third-party logistics company anticipates hiring, primarily in sales and information technology, over the next five years.

“County Commissioners at the time made a good investment in the future economic growth of Clermont County,” Commissioner Ed Humphrey said.

David Painter, President of the Board of County Commissioners, added: “This week’s good news about 600 new jobs and a $20-million investment means a brighter future for families and our community. It demonstrates the payoff of our partnership with Union Township and our continuing commitment to providing a great environment for businesses to grow and prosper.”

“This expansion proves what we’ve said all along – that Clermont County is a great place to do business, work, live and raise a family,” Commissioner Claire Corcoran said. “A big part of our quality of life lies in support of the businesses who provide important jobs and tax revenues to keep our schools, roads and other necessities solid and vibrant.”

This story started in mid-2005, when rapidly growing TQL was running out of space in Park 50, Miami Township. The company needed a new building to attract young professionals required to maintain its projected growth. No office park with available land existed in Clermont County at the time.

Ken Oaks, founder and CEO of TQL, approached Cincinnati United Contractors (CUC) to construct a new 100,000-square-foot Class A office building with highway visibility in the Cincinnati market. Having recently completed the construction of the new Union Township Civic Center, CUC president Chuck Kubicki knew that Union Township would welcome a growing company with a bright future. Kubicki also knew there were 99 acres of undeveloped land with I-275 visibility that officials in Union Township and Clermont County wanted to see developed as a business park. Several developers had unsuccessfully attempted to assemble the parcels in the past, so CUC and TQL approached officials with the township and county for assistance.

Within weeks, Clermont County officials had the property under contract. Additional agreements were then drafted which would provide a roadmap for the next decade, initiating the creation of the Ivy Pointe Commerce Park and the rebirth of the Eastgate area.

The Board of County Commissioners took very seriously the responsibility of using public tax dollars to aid in the development of a new business park. The strategy had been used by other Ohio communities, but was new and untested in Clermont County. County Commissioners crafted several agreements with the security of public funds a primary goal. To ensure the county would retain some asset with value, the county would retain ownership of the land.

Here’s how the project was structured:

The development impacted the county more than any other single public or private development project since the construction of I-275. TQL’s growth has exceeded all expectations, with the company new employing more than 5,500 employees in 57 offices across the United States. TQL’s headquarters campus will hold over 2,000 employees when construction is complete. TQL is the second-largest freight brokerage firm in the nation, and the Greater Cincinnati region’s largest private company.

In addition to TQL, Ivy Pointe houses multiple tenants with hundreds of jobs in the Senco/Tata Building. Mercy Health opened the three-floor, 78,000-square-foot Mercy Health – Eastgate Medical Center there in May.

The Clermont County Commissioners set the policy for the CIC, determine how it will be used to achieve economic development goals that will benefit the citizens of Clermont County, and provide the necessary funding to enable the CIC to carry out its intended functions. The Commissioners also intended the initial investment of $8.3 million in Ivy Pointe to be a seed investment, which ideally would be perpetually reinvested in other economic development projects to spur private sector investment in the community. To date, these dollars have been reinvested in Jungle Jim’s, the redevelopment of the former Ford transmission plant in Batavia Township, and most recently South Afton Industrial Park in Williamsburg Township. 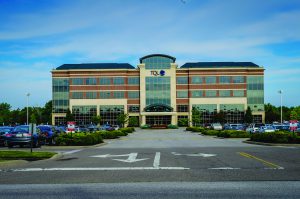