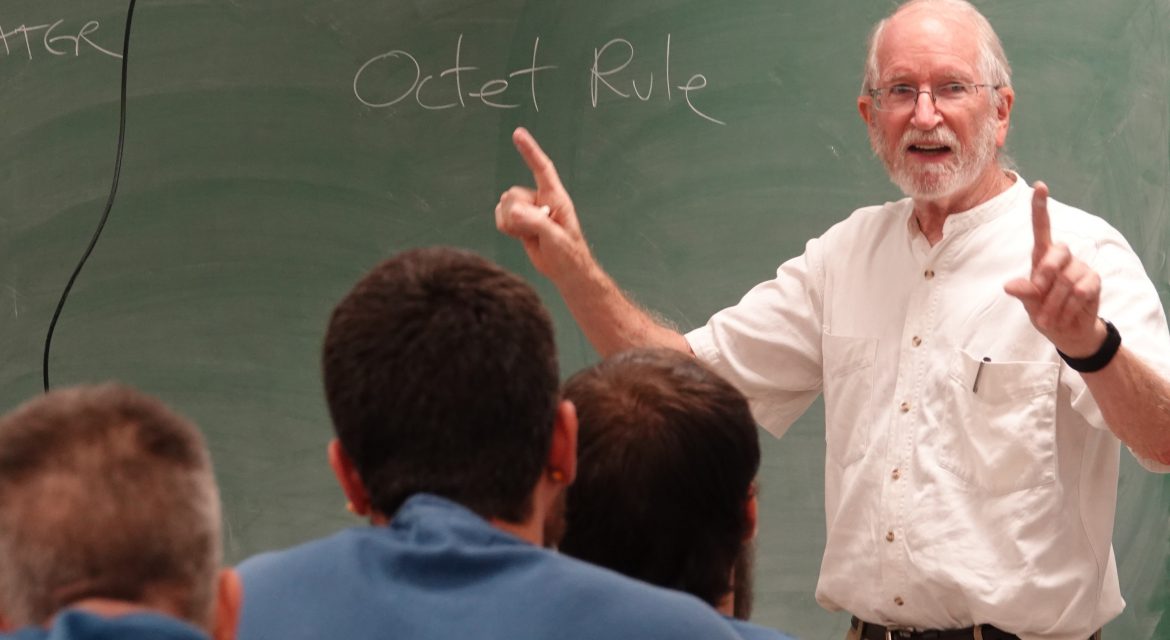 BATAVIA, Ohio (July 18, 2019) — Retired biology and chemistry professor David Fankhauser volunteered his talents at the Clermont County Jail last year because he missed teaching. He had a long history of social activism, fueled by a Quaker faith that stresses prison reform.

“I called and asked and they interviewed me,” said Dr. Fankhauser, 77, who retired two and a-half years ago from the University of Cincinnati. “I didn’t know if they would do a background check,” he added with a laugh. “I did tell them I was arrested in Mississippi.”

After receiving a PhD in Biology from The Johns Hopkins University in 1971, he and his pregnant wife moved to a small farm in Clermont County to explore Earth-friendly lifestyles. They delivered their three healthy children at home. They developed self-sufficiency skills to promote family health including a large organic garden, goats and chickens, well water, wood heat, and their own sewer and water, with minimal consumption of resources.

In 1973, he began teaching at UC Clermont College, a new, rural branch of the University of Cincinnati.  He created the majority of their current biology lecture-lab courses, including science majors’ biology, microbiology, genetics, cell biology and anatomy and physiology.

“We had had two or three teachers – the last was an elementary school teacher – who were paid,” Hogue said. “We had trouble finding someone. He calls me out of the blue. He doesn’t want paid. He’s doing this just to help somebody. He’s got a helluva background. Inmates really seem to like his class.”

Guards invite inmates to the voluntary “academic enrichment” hour at 9:30 a.m. Tuesdays.  At first, five to 10 would attend. Lately, the number averages in the teens. Seventeen came to a July 16 class on Water: The Solvent of Life.

One of the inmates told a visitor at the July 16 class: “He’s a good teacher!”

“I believe that alienation and low self-esteem are major factors in asocial/antisocial behavior leading to these men being incarcerated in the first place,” Dr. Fankhauser said. “I attempt to nurture their self-esteem, and facilitate their integration into society.”

On this day, inmates wearing blue jail fatigues grab golf pencils and a piece of paper when entering the classroom with four rows of college classroom-type desks. The bespectacled Dr. Fankhauser, wearing a short sleeve shirt and Khaki’s, greets the arrivals. His gray hair is thinning.

After the door locks shut, Dr. Fankhauser launches into a lively review of last week’s lesson on the chemical activity of elements. He asks questions and virtually everyone chimes in with answers, which he records on the chalk board. He walks around the room and motions with his hands, sometimes using a pointer to draw attention to an illustration on a PowerPoint presentation on a small monitor above the chalk board. Inmates take notes and laugh at his humor.

“It’s the whole point of the Socratic method,” Dr. Fankhauser said afterward. “You ask questions – and their answers lead you through the material. I love it that they’re not afraid to give a wrong answer.”

Dr. Fankhauser comes up with the day’s lesson at 6 a.m. He says it’s impossible to develop a curriculum because inmates serve various sentences. This week, 40 percent of the students are new.

“I’m really pleased those who returned remembered what I’m attempting to teach,” he said. “They are really so appreciative. That really helps, too.”

Dr. Fankhauser is really glad he made the call to jail officials.

Captain Hogue added: “I’m sure his classes are unique to the state. I don’t know anybody close to it.”