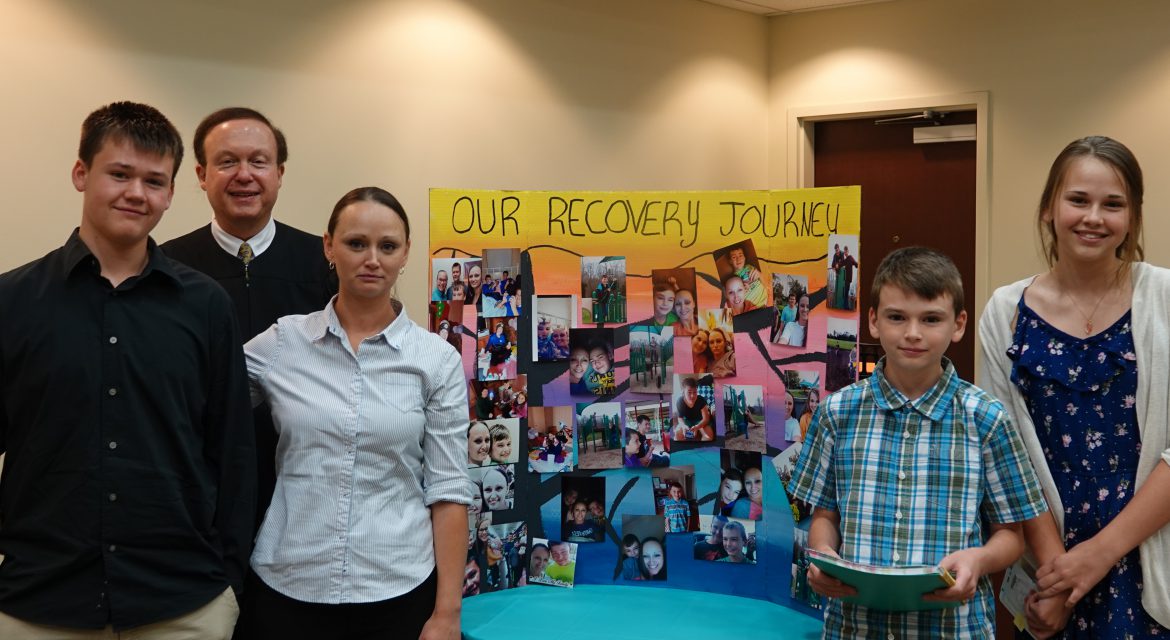 BATAVIA, Ohio (June 27, 2019) — Years of alcoholism and drug addiction pushed Barbara Pingleton to the brink of losing her children when she arrived at Clermont County Family Recovery Court last year.

“To think that you are where you are today is truly amazing,” Judge James A. Shriver told the mother of three during the court’s sixth commencement ceremony today. “I must say that you have done exceptionally well.”

Judge Shriver then turned to Gavin, 15, Delainna, 13, and Hayden, 11, and congratulated them on their success. County commissioners, court officials and child protective workers joined family and friends in smiles and applause.

Barbara proudly stated that all get great grades in school and achieve perfect attendance. She told the gathering that notes from her children tucked in her monthly planner keep her motivated. One read: “Mom, I’m so proud of you. You’re doing a great job. Keep it up.”

“Kids, you have a great mom,” Judge Shriver said. “I think you recognize that.”

All three nodded, showing the smiling faces prominent on a poster board of photos Barbara brought for her graduation remarks.

Barbara credits Family Recovery Court for giving her much-needed accountability. The court, which began in 2014, works to reunite families, as parents complete a rigorous program. The program requires weekly appearances before Judge Shriver, as well as frequent drug screens. Parents must submit weekly letters detailing their activities, which comprise a journal that is returned to the parents when they graduate. They must attend AA or similar meetings. They receive treatment. They must have a job and secure stable housing.

“One day at a time and by the grace of God, I’m sober today,” Barbara said. “I owe a lot to the Eastside Center (an AA clubhouse), my sponsor and a lot of meetings. My passion today is service, giving back.”

Barbara, 38, started drinking at age 13. She was addicted to alcohol, speed and pills for 15 years. Her life included many toxic relationships, depression, suicidal thoughts and relapses — until her recovery began more than 300 days ago.

“I would put a smile on my face, even though I was dying inside,” she said. “I never thought I would be able to live a life sober. It was so scary.”

Barbara finished her remarks by holding up certificates she has earned for various milestones. For example, she’s been employed for more than a year.

“This hasn’t been the easiest thing,” Barbara said. “I’ve gone through so many changes, but I’m not alone. It’s teamwork.”