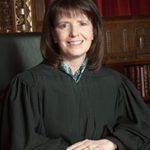 Justice French was elected to her first full six-year term in 2014, after being appointed by Gov. John Kasich to fill a vacancy.

Justice French has spent the last two decades in public service.  She has served as an appellate judge, chief legal counsel to the governor, an assistant attorney general, and a state government lawyer.  Her legal experience also includes working as a corporate attorney and in private practice.

The daughter of a schoolteacher, Justice French appreciates her Ohio roots and education, and she is committed to being a part of civic education in Ohio.  She speaks frequently to high school students, particularly those studying the Ohio judicial system.  She serves as a mentor in a local program supporting students in foster care who want to go to college.

Justice French served on the court’s Access to Justice Task Force and continues to be an advocate for granting all Ohioans access to the civil justice system.  Working with legal aid organizations around the state, she encourages lawyers to engage in pro bono activity.

She received three degrees from the Ohio State University: a bachelor’s in political science, a master’s in history and, with honors, her law degree.  In 2018, the OSU Moritz College of Law awarded her the Distinguished Jurist Award for her work on the bench. ####