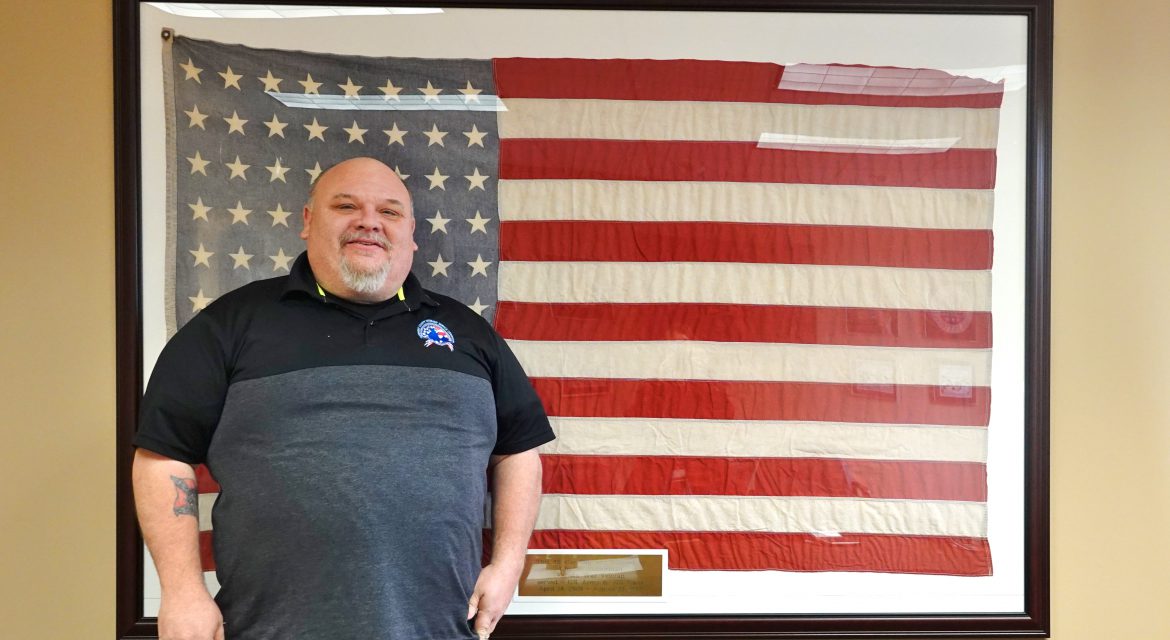 BATAVIA, Ohio (Dec. 28, 2018) – Frank Morrow, the new executive director at the Clermont County Veterans Service Office, believes in the mission of his office.  “We’re helping veterans and their families,” he says. “It can be challenging to navigate the VA system, but a lot of times, when we win cases, it changes people’s lives.”

Morrow has worked at the Veterans Office since 2001. On Nov. 1, 2018, he was appointed to the position of executive director, following longtime director Howard Daugherty, who retired.

That’s not the only time Morrow followed his father. After working as wastewater treatment operator for Clermont County from 1993 to 1999, Morrow became a railroad conductor for the Norfolk & Southern Railroad – like his dad – conducting freight from Cincinnati to Danville, Ky., and back again. But he was laid off several times because of low seniority and he decided to try the county again. That led to the position with the Veterans Service Office  – and a sense of purpose that still drives him today.

Morrow says he wants to make sure all veterans in the county are aware of the existence of the office, and the services it offers. “Our job is to reach every veteran in Clermont County,” he said. “Every week or two, a Vietnam veteran will walk in who had no idea that they could get benefits. We want to extend outreach as much as possible.”

To that end, Morrow has increased social media posts on the office’s Facebook page (www.facebook.com/clermontcountyveteranservicecommission), and will use radio more to get its message out. On Nov. 1, the office sponsored its first blood drive, which Morrow plans to make an annual event. “Some veterans don’t know that we exist,” Morrow said. “We want to make sure that they know about their benefits, and that our office can help them.”

“We take people from the beginning of the process, and walk them through it,” he said. “We have had widows who come in here, very unassuming, not expecting to get anything. They are on a fixed income, and it can be life-changing when they find out they are entitled to a benefit.”

The office keeps busy. In 2018, the staff transported 881 veterans to their VA medical appointments, assisted 1,075 veteran families with financial assistance, and filed hundreds of disability claims for veterans and their dependents.

Morrow, who has been married to his wife, Rusann, for 25 years and lives in Washington Township, is very proud of his Chickasaw heritage on his mother’s side. The Chickasaw were one of the “Five Civilized Tribes” who were forced out of the American South between 1830 and 1850 and marched along what came to be called the Trail of Tears, many settling in Oklahoma.

Morrow researched his mother’s lineage through the Dawes Rolls – which lists people accepted as members of the tribes between 1898 and 1914. There he found the names of his great-great-grandmother and great-grandfather.

To find out more about the Veterans’ Service Office, go to https://clermontcountyveterans.com, or call 513.943.3000. Staff officers can help to provide emergency financial assistance to veterans, spouses, dependent children and surviving spouses; and assist veterans in obtaining earned benefits from the federal, state, and local levels of government.