Mussel collection a success as dam is breached in Williamsburg 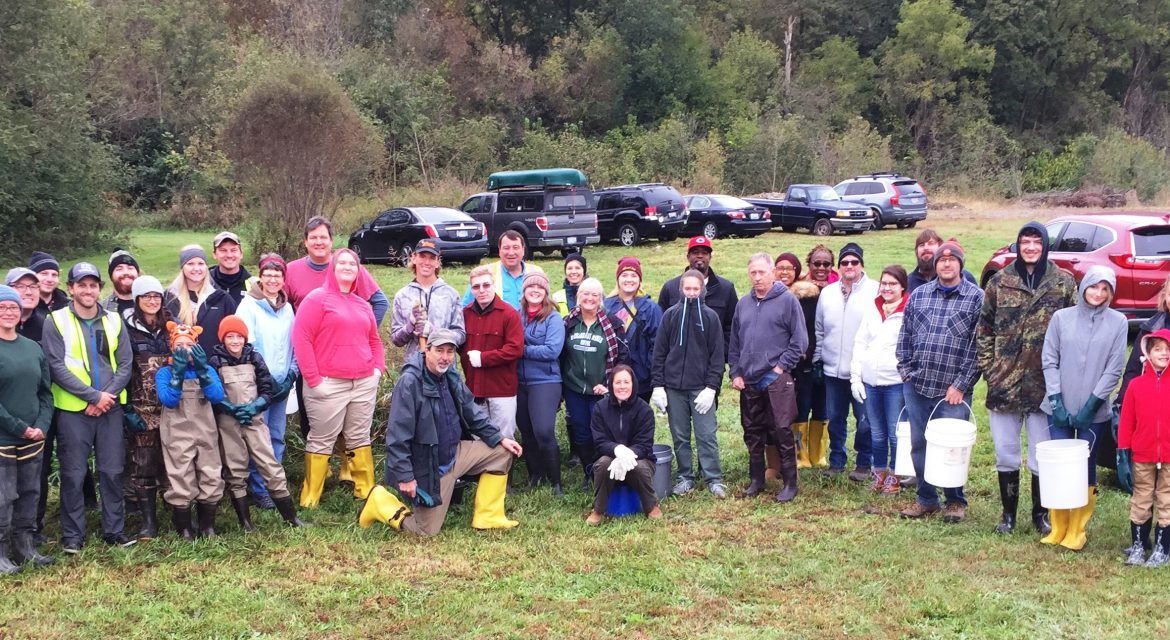 Volunteers gather to help collect mussels from the East Fork as the dam in Williamsburg is breached.
By Kathleen Williams

WILLIAMSBURG, Ohio (Oct. 17, 2018) – The work was slimy but rewarding: More than 60 volunteers collected hundreds of mussels on Saturday, Oct. 13, during a dam removal project in the Village of Williamsburg.

The dam, on the East Fork of the Little Miami River, was built in the early 1930s as part of a local water works plant that supplied drinking water to residents. The plant was closed in 2003, and the dam was no longer needed. The Clermont County Soil & Water Conservation District joined with the Village of Williamsburg 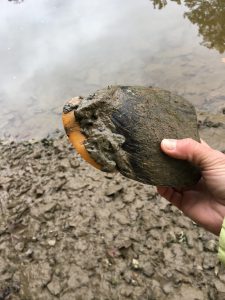 An example of the mussels collected.

to remove the dam this autumn to return the river to its natural state.

On Saturday, the dam was breached at 7:30 a.m., lowering the river level upstream and exposing hundreds of mussels along the river banks. Volunteers, coordinated by Environmental Solutions & Innovations, worked on both sides of the river to collect more than 500 mussels in the project area.  Breaching the dam and relocating the mussels are the first steps in the process; eventually the dam will be completely removed and stream restoration will begin.

“We encountered one problem — the mussels were so large that they overwhelmed the holding tanks and caused us to quit counting and just start relocating them as fast as we could,” said Warren High, a senior biologist with Wood Environment & Infrastructure Solutions. “We were unable to measure, weigh, and mark the mussels as planned due to the large number and size; a problem we were pleased to have had.” The East Fork of the Little Miami River has a well-documented diverse mussel population, including the rayed bean (Villosa fabalis), a state and federally endangered mussel.

Most of the mussels were moved upstream in the East Fork of the Little Miami River, but some were moved to the Mill Creek in Hamilton County to help replenish extinct mussel populations. “This is the first inter-basin mussel relocation to occur in Ohio,” High said. The mussels relocated to the Mill Creek included the white heelsplitter, fat mucket, and floater species, all of which have a higher tolerance for pollutants commonly found in urban streams.

In addition to the mussel relocation, volunteers also assisted with honeysuckle removal and planting shrub and tree seeds along the newly exposed banks. Old Firehouse Brewery helped sponsor the event. “We’re pleased to see so much community support for this project and we’re eager to see the river returned to a more natural state,” said Williamsburg Mayor Mary Ann Lefker.

In the coming weeks, crews will work to fully remove the dam and install restoration and bank stabilization features to complete the project. More information can be found on the Clermont Soil & Water Conservation District website: https://www.clermontswcd.org/williamsburg-dam-removal/.