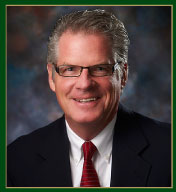 BATAVIA, Ohio – Clermont County Commissioners today (July 25) appointed Batavia Township Administrator Rex Parsons to the Clermont County Port Authority. Parsons will fill the unexpired term of Christopher Hamm, who resigned on July 16 and whose term was due to end on Aug. 19 of this year. Parsons was also appointed to a full four-year term beginning on Aug. 20, 2018, through Aug. 19, 2022.

Commissioners also reappointed Greg DeFisher, President and CEO of Freeman Schwabe Machinery, to a four-year term, from Aug. 20, 2018, through Aug 19, 2022. DeFisher was appointed on Nov. 11, 2017, to fill an unexpired term.

In his letter of resignation Hamm, CEO of GSM Recycling, said, “As a member since inception, I am proud of the work that was accomplished by our team during my tenure. As I focus on other endeavors, I wish the Port Authority continued success in supporting development in Clermont County.”

The Port Authority was established by County Commissioners in 2012 to facilitate economic development in Clermont County. Under the Ohio Revised Code, Port Authorities have extensive powers to promote development. More information can be found here.