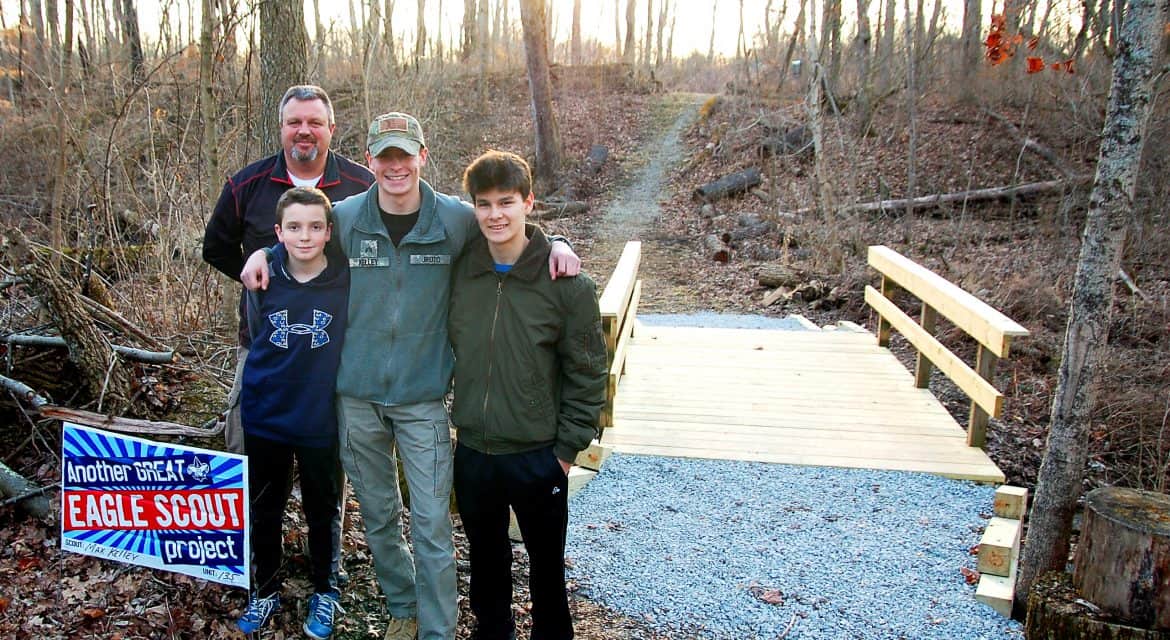 Max Kelley, center, is joined from left by his father Mike Kelley, brother Jack Kelley and best friend Josh Johnson. On Feb. 13 they helped put the finishing touches on the bridge Max built for his Eagle Scout project in Pattison Park.
By Kathleen Williams

The 15-year-old Milford High School sophomore designed and built the structure on the sugar bush trail at Pattison Park for his Eagle Scout project.

He’s been part of Troop 135 out of St. Veronica in Mt. Carmel since first grade and said Scouting provided relief from the bullying he received in grade school.

“I found a bunch of guys just like me, guys who wanted to camp, to work hard, to become leaders,” Kelley said. “I’ve loved the camping and camaraderie.”

From the age of 8, Max has had a goal to serve in the U.S. Army as an officer. He hopes reaching the rank of Eagle Scout will help set him apart as pursues a college career at either West Point or The Citadel.

“I know how to persevere and how to do some things at 15 that some adults never do,” he said. “I’m just trying to be the best I can and to serve my community and, eventually, my country.”

His service started with a love for the Clermont County Park District.

“The woods behind the sugar shack are usually pretty quiet, not a lot of people,” Kelley said. “The parks for me are kind of a peaceful place where you can just go, be quiet, enjoy the nature and clear your head. I really enjoy the nature part of the Clermont parks.”

Working with Park Director Chris Clingman to identify a need at Pattison, Kelley began his Eagle project last spring and put the finishing touch –  handrails for the bridge – on his creation Feb. 13.

“I know Max had some obstacles, but we’re glad he’s finished,” Clingman said. “Eagle projects take a lot of time and effort to organize. Max’s bridge will make it easier for our naturalists to collect sap during maple season and for our guests just to get across the creek and enjoy that side of the woods.”

Kelley agreed there were challenges. His first build day – with about 20 family members, friends and fellow scouts as volunteers – resulted in a productive effort, but revealed some flaws in the design that needed to be corrected. Several other attempts to build were foiled by weather.

All part of the demanding Eagle Scout process. Fewer than four percent of all Boy Scouts attain the rank nationally. Kelley raised the money for the project – eventually about $1,100 in materials like lumber, concrete and gravel – including a $500 donation from RiverHills Bank.

His father, brother and best friend were on hand to help install the handrails.

“It feels pretty darn good, like a lot of hard work has been completed,” Kelley said of the finished bridge. “I hope I can come back with my own kids some day, show them this bridge and ask them, ‘What do you want to do with your lives?’ This bridge for me is the beginning of what I want to do with mine.”

The Clermont County Park District welcomes Boy Scouts looking for Eagle projects and volunteers of any kind. Interested in getting involved with one of your community’s best public resources? Please call the park district office at 513-732-2977 or write to parkdistrict@clermontcountyohio.gov.