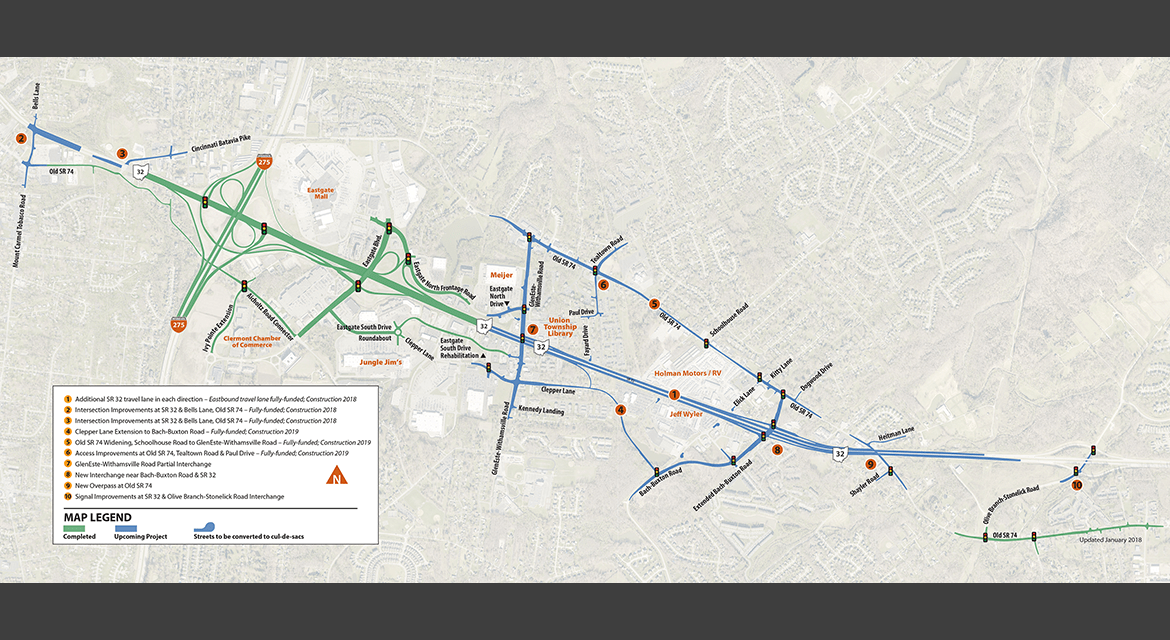 “Together with the Ohio Department of Transportation and our local transportation partners, we have invested more than $162 million in Clermont County to improve travel for those who use the SR 32 corridor,” said Pat Manger, Clermont County Engineer and Board Member of the CCTID. “We are pleased that ODOT has extended its commitment to improving safety, easing congestion and supporting job creation by continuing its investment in our area.”

Manger said the $5 million award would be used to fund property acquisition costs related to the construction of an interchange to replace the intersection of SR 32 with Bach-Buxton Road and Elick Lane, which is part of the Eastern Corridor Program of projects. These improvements, which include an additional travel lane on SR 32 in each direction, will allow traffic to move from I-275 to Batavia on SR 32 without a traffic signal.

The funding will also help open up economic development opportunities in Clermont County and east along the SR 32 corridor. “We believe ODOT recognized the importance of funding this project work because of the strong connection SR 32 has to supporting increased investment throughout the entire southern region of the state,” said Clermont County Commissioner and Board President Ed Humphrey.

SR 32 is one of the highest-volume local routes in Ohio and is a critical east-west connection for the movement of people, goods and services throughout the state. Current projections show that traffic volumes on SR 32 are approaching interstate levels and that by the year 2030, SR 32 is expected to carry 79,000 vehicles per day, not much less than I-275’s estimated 84,000 vehicles a day.

“Business-ready sites are considered highly attractive to potential companies because they reduce the time it takes for companies to locate and start operations in a given location,” said Humphrey. “More than 1,850 jobs are expected to be created directly at the South Afton site, with an additional 1,675 new jobs with suppliers and other supporting services. The development is expected to lead to $1.5 billion in local economic activity per year once completed,” he added.

Later this year, the Transportation Improvement District will begin making improvements on SR 32 at Bells Lane; and ODOT will complete work to add a second lane from the southbound I-275 exit to SR 32 and construct an additional travel lane on eastbound SR 32 from GlenEste-Withamsville Road to Olive Branch-Stonelick Road. In 2019, the Clepper Lane Extension will be built, Old SR 74 will be widened from Schoolhouse Road to GlenEste-Withamsville Road, and access improvements at Old SR 74, Tealtown Road and Paul Drive will be made.

Engineer Manger said that the Transportation Improvement District has a record of success, noting that the organization has completed more than 60 projects in Clermont County since its creation in 2006. “Our goal is to bring together multiple groups, develop one agenda and speak with one voice to local, regional, state and federal decision-makers so that numerous projects can be completed in a coordinated fashion, and the resources of those agencies can be leveraged to generate funding for projects that might not otherwise have been completed. This award from ODOT will allow us to continue that progress.”

The CCTID is currently working on nearly two dozen roadway improvements that will increase safety, support better traffic flow through the area, and provide the infrastructure for continued economic development throughout the county. More information about the CCTID and their project work can be found on-line at GoClermont.org.

About the Eastern Corridor Program

The Eastern Corridor is a program of integrated, multi-modal transportation investments. The Program will enhance our regional transportation network by improving travel and connections between central Cincinnati and the communities extending east through Hamilton County into western Clermont County. Program elements include improvements to existing road networks, new and expanded roadways, rail transit, expanded bus routes and improvements for pedestrians and bicyclists. The Eastern Corridor Program is administered by the Ohio Department of Transportation (ODOT) in cooperation with the Federal Highway Administration (FHWA) and the Eastern Corridor Implementation Partners.

To learn more, go to: EasternCorridor.org.