Advocating for kids when they can’t advocate for themselves 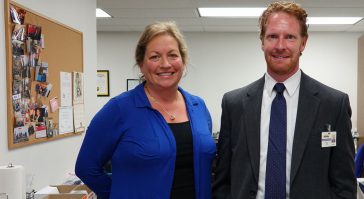 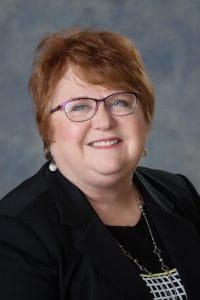 Wright, an Assistant Vice President at Park National Bank, is a volunteer guardian ad litem (GAL) for children who enter the Juvenile Court system in Clermont County through no fault of their own. These are children who were removed from their parents’ care because of abuse or neglect. It’s a heartbreaking situation – and Wright, as that child’s guardian, represents that child’s best interests before Judge James Shriver or one of the magistrates in Juvenile Court.

“I am really passionate about it,” Wright said. “It is so rewarding to be able to see that these children have a voice, that they matter.”

Wright is one of 35 guardians ad litem for CASA for Clermont Kids but 35 is hardly enough to handle the almost 120 children under CASA’s care. CASAs – or Court Appointed Special Advocates – can be found throughout the United States and in most counties in Ohio. The ones in Ohio are governed by Ohio Supreme Court rules, said Nathan Bell, Executive Director for the Clermont CASA, which ensures that certain standards are met by the GALs.

Bell is passionate, too. His undergrad degree focused on sociology and psychology, and he always knew he wanted to work with children. Instead of becoming a therapist, he got a law degree from Duke University, and focused his efforts on courts and children. Before coming to Clermont County in 2014 to take over the reins at CASA, he was a full-time GAL for the Hamilton County Public Defender’s Office for 12 years.

‘The only consistent person’

“The difference that guardians ad litem make – other than being the community’s eyes on how the system is working for this child – is that we are sometimes the only consistent person in their life while they are involved in the court system,” Bell said. “As they move, changing homes, changing schools, changing CPS caseworkers, we are there. They know, this is my person, they are only for me, they are MY voice.”

To become a guardian ad litem, volunteers go through an initial screening and interview, before undergoing 30 hours of training. They go to court during this time to get a feel for the kinds of cases they will be assigned. Once they are certified, they are always accompanied to court by one of the volunteer coordinators who work for CASA.

Wright became interested in becoming a guardian ad litem after seeing the impact a GAL made in a case involving a member of her extended family. “I was happy that she was represented,” Wright said. “This was something I wanted to pursue … to be the voice of a child in the court system.” 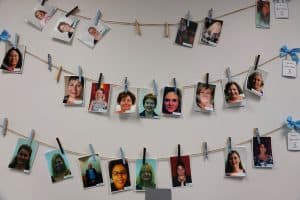 Photos of some of the guardians ad litem at CASA.

She has been a guardian for six children since 2010, including two siblings. The children she has advocated for have been young – no one has been older than 8, with several between 18 months and 3 years. She visits each child at least once a month, and before every court hearing, which is typically every three months. Since most cases stretch from 18 months to two years, guardians must commit to being with the child during that period. (It takes up to two years to sever parental rights if the court decides that needs to happen.)

“When I meet with the child, I tell them what my job is,” Wright said. “I tell them that the judge wants to do what is best for them. I ask them what they would like me to tell the judge. Sometimes it’s as simple as ‘I scored a goal in soccer.’ Sometimes  it’s ‘I just want Mommy and Daddy to be back together again.’”

To determine what is best for the child, the guardian will meet with and interview the family, will meet with relatives, and with teachers if the child is in school. “We follow the parents’ progress … are they working hard to get better? Are they visiting their child? It’s complex to say the least,” says Wright.

A solution for the child

Wright says she does get attached to the children, but training helps her to manage that. “It’s inevitable to care about the children,” she said, “but you know there is going to be a solution for the child. When you see the parents do the work and be reunited with their child, or when you see the child adopted into a forever family.”

CASA is always looking for volunteers, Bell says. “We are looking for people who are committed and consistent, who are able to do volunteer work for a minimum of two years. We need people who are kind, considerate, caring, and can also be the balanced voice for the child.”

Volunteers must have a clean criminal record, be able to drive, and have some flexibility so that they can appear at court during the hearings, held every three months. Visiting with children and others can be done at night or on the weekend. Wright says she is grateful that Park National, which is a big supporter of community causes in Clermont County, allows her the flexibility to be a GAL.

To find out more about becoming a guardian ad litem for CASA for Clermont Kids, please contact Nathan Bell at 513.732.7160 or email him at Nathan@casaforclermontkids.org. #######