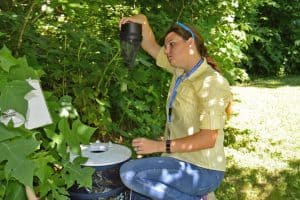 BATAVIA  (Aug. 16, 2017) – The Ohio Department of Health is reporting Ohio’s first case of human West Nile virus in 2017. The first case is a 44-year old male Clermont County resident. He is recovering from mild illness.

In 2016, there were 17 human cases of West Nile virus in Ohio, including two in Clermont County. According to the Centers for Disease Control, more than 200 people in 28 states have tested positive for the virus so far in 2017.

People most often get West Nile through the bite of an infected mosquito. Mosquitoes are infected when they bite an infected bird. Once infected, they can spread the virus to people or other animals.

West Nile virus is found throughout the United States and can be contracted anywhere there is a mosquito carrying the virus. The affected individual recently returned home to Clermont County after traveling out of state.

Most people infected with the virus do not show any illness, but about 20 percent may show symptoms such as fever, headache, vomiting, or diarrhea. In extremely rare cases, (less than one percent) the virus can cause severe illness such as encephalitis or meningitis, or even death.

“Late summer is when West Nile cases usually appear in Ohio,” said Health Commissioner Julianne Nesbit. “Our best advice is to protect yourself and your family from being bitten by wearing insect repellent, and eliminate any standing water in your yard where mosquitoes can lay eggs.”

As part of a Mosquito Control Grant, Clermont County Public Health has been trapping and monitoring mosquitoes throughout the county, and responding to standing water complaints. According to the Ohio Department of Health, 43 Ohio counties are conducting mosquito surveys, and 19 of those counties have found West Nile virus in the mosquito population.

To avoid mosquito bites, citizens are encouraged to: