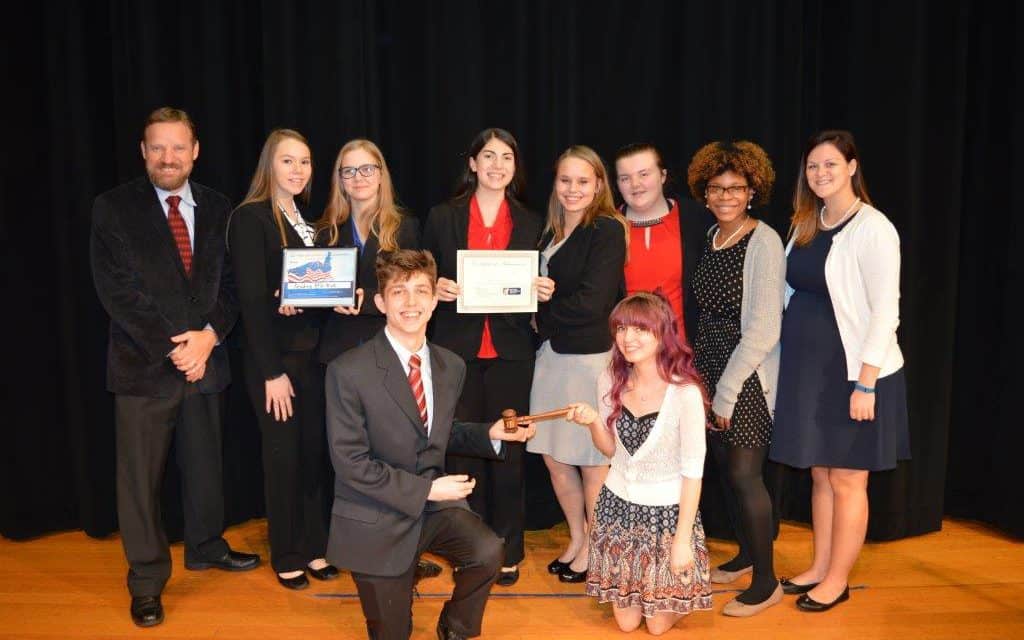 Students from Reading High School, one of the mock trial teams advancing to the regional competitions.
By Kathleen Williams

BATAVIA, Ohio (Jan. 23, 2017) — High school mock trial teams from Reading, Western Brown, Milford, Leaves of Learning, and Batavia have advanced from the local district mock trial competition to the regional competition that will be held at eight different locations around the State of Ohio on Feb. 10. Teams that win both trials in that competition will advance to the state competition, which will be held on March 9-11.

The Ohio High School Mock Trial Program helps students develop critical thinking skills by analyzing a problem and developing arguments for each side of it. It also promotes citizenship education and active participation in democracy.

In the 2017 Ohio mock trial case, students consider a case of defamation of a public official by a news station. In the fictitious case, Gov. Pat Justice speaks at a school assembly. Afterward, he meets with the school principal, and an argument ensues. Governor Justice leaves abruptly, and the principal is found dead from a brain aneurysm. A student who overheard the argument reports to a local news outlet that Governor Justice killed the principal. While the student’s account is quickly disproven, the story goes viral. The governor loses a bid for re-election and files suit against the news station, alleging defamation.

Each mock trial team consists of five to 11 students who prepare both plaintiff and defense cases and participate in two trials against opposing teams. Students assume the roles of witnesses and attorneys to present both sides of the case. Local judges and attorneys volunteer their time and expertise to preside over and score the mock trials.

This year, more than 3,000 students competed in the district competitions.