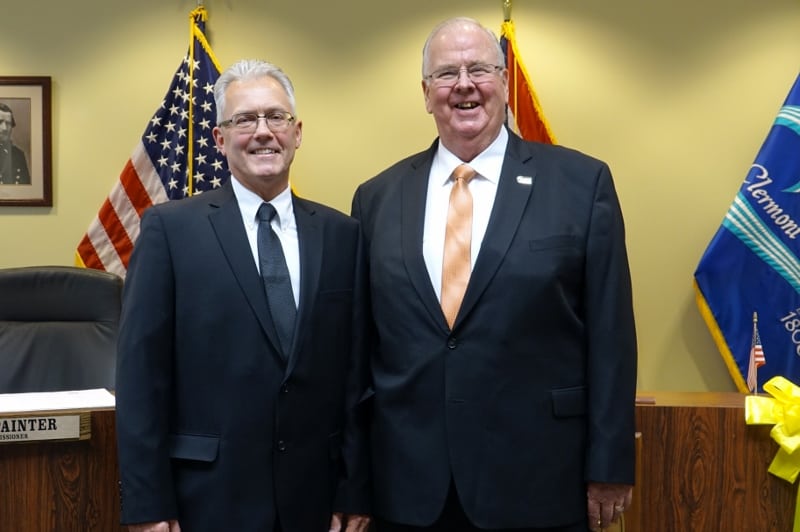 BATAVIA, Ohio (Dec. 30, 2016) – Ed Humphrey and David Painter were sworn in as Clermont County Commissioners on Dec. 30. Commissioner Humphrey is beginning his third term. Commissioner Painter is replacing longtime Commissioner Bob Proud, who is retiring. Both men were elected in November.

“I thank God for allowing me to be here,” said Commissioner Humphrey. On Dec. 3, 2015, Mr. Humphrey suffered serious injuries in a car accident in Miami Township. He thanked his “bride of 49 years,” Janice, and his family, for staying by his side during his long rehabilitation. He reminisced that his daughter, Gail, at the time in Singapore, hopped on a jet within two hours of hearing about his accident for the 45-hour flight back to Cincinnati. He thanked Commissioners Bob Proud and David Uible for their support during his recuperation. “It’s been a good run,” he said, “and I have another four years” to look forward to.

Commissioner Humphrey was first elected to the Board of County Commissioners in 2008. Previously, he was a longtime Miami Township trustee. He is the past president of the Ohio-Kentucky-Indiana Regional Council of Governments Board of Directors, and is now a member. He was appointed by Gov. John Kasich to serve on the statewide ESINET Steering Committee to represent CCAO.

Mr. Humphrey is a lifelong resident of Miami Township. He and his wife, Janice, have three children and eight grandchildren. Mr. Humphrey, who has an MBA from the University of Cincinnati, is retired from Procter & Gamble.

Commissioner Painter was sworn in by Municipal Court Judge Kevin Miles. He said he felt called to public service. “My commitment to you is steadfast,” he said. “Together we will raise the bar for all Clermont County citizens. … My door will always be open and my cell phone will always be on.”

He previously served for eight years on the New Richmond Village Exempted School District Board of Education, two of those as President of the Board.  Previously he was on the Ohio Township Board of Zoning Appeals.

Mr. Painter’s past experience includes 40 years in the construction and engineering business, having held positions as resident construction manager, project oversight manager, regional manager, and general manager. Mr. Painter joins the Board of Clermont County Commissioners after a career in private industry, where he last served as the project oversight manager at the East Tennessee Technology Park (K-25) Environmental Remediation Project.

Mr. Painter is a lifelong resident of Clermont County, and lives in New Richmond with his wife, Karla. They have three children and four grandchildren. Mr. Painter received his Bachelor of Science degree from the University of Findlay in Findlay, Ohio.  #######