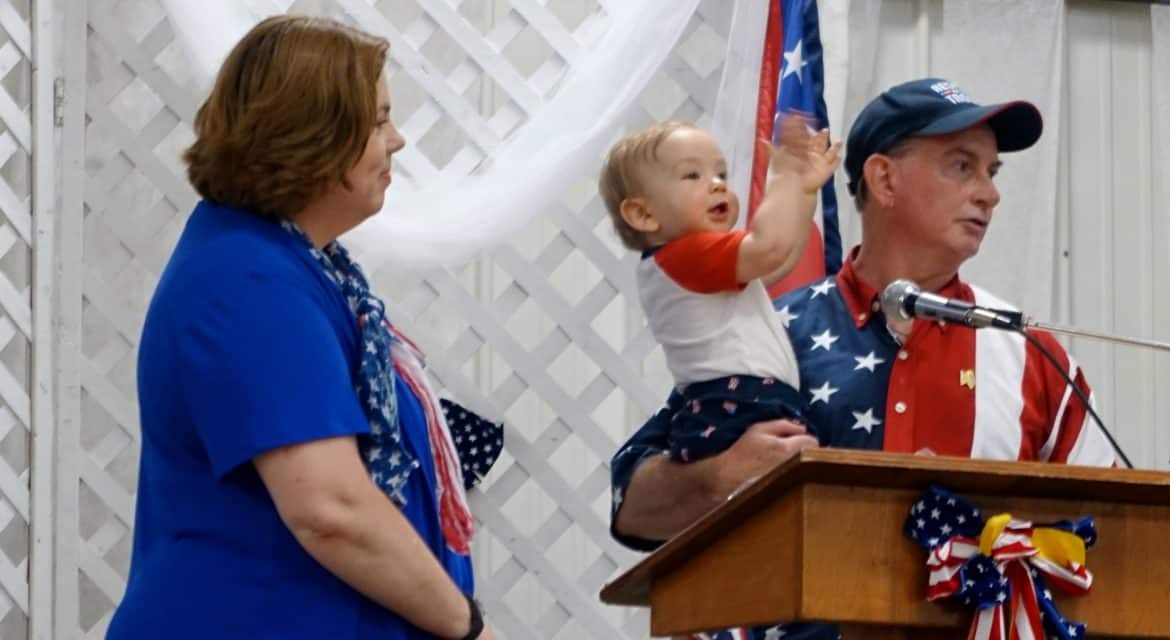 Commissioner Proud with his wife, Rebecca, and his son, Michael, during the Salute to Troops at the 2015 County Fair.
By Kathleen Williams 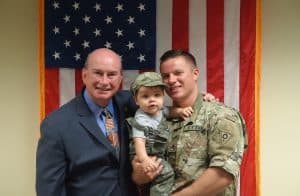 Commissioner Proud with Sgt. Joshua Kasten and his son, Blake, during a recognition at Session in August 2016.

BATAVIA, Ohio (Dec. 8, 2016) – Some politicians want to be called anything but, well, a politician. Not Clermont County Commissioner Bob Proud.

“I ask some people why do you run away from that title?” Proud says as he wraps up his last term in office. “Being a politician is being a public servant.”

Proud, 58, is completing his seventh term and final month in office. His last Commissioners’ Session is scheduled for Wednesday, Dec. 14. He took office in January 1989, having just turned 30, and has won handily every race since then.

He isn’t tired of the job, but he has new and more important priorities. Proud, who married for the first time in 2012, plans to be a stay-at-home dad with his son, Michael, 2, while his wife, Rebecca, continues working as a professor at UC Clermont.

“I’m exchanging one title for another,” he says. “In fact, it’s a greater title, being a full-time dad. I always knew that I would know when it was time to leave. Now I can say to Michael, ‘Hey, buddy, do you want to go fishing?’ and we can go fishing.”

Bob Proud is Clermont born-and-bred. His parents, Charlie and Beulah, worked a small farm in Amelia, where they grew soybeans and field corn, and raised cows, hogs and chickens. “My dad also hauled the Cincinnati Enquirer to Richmond, Ind., every night,” Proud said.

“I lived a Currier and Ives childhood,” Proud said.  “We would find a Christmas tree in the woods, and bring it home to decorate it. My grandparents lived on a bigger farm nearby. They had no running water. They cooked on a wood stove and used a potbelly stove to warm the house. They had a smokehouse – and an outhouse.”

Both parents came from large families. “I have over 50 first cousins on my Dad’s side. I often joked that just having my relatives vote for me put me in office.”

From Amelia High School (he jokes that he’s still having issues with the whole consolidated West Clermont High School thing), Commissioner Proud attended and graduated from Cumberland College in Kentucky with a Bachelor of Science in both religion and psychology and a certificate in secondary education. He was an avid tennis player, and his plan was to teach high school psychology and coach tennis. But then he was offered a job in public relations with Clermont Senior Services, and its director, Lois Brown Dale, took Proud under her wing.

“In 1987, she came to me and said ‘We’re going to have you run for county commissioner.’ My exact words were, ‘You’re nuts’,” Proud recalls. He hadn’t aspired to elected office, but once the idea was planted, he grabbed it. He ran against an incumbent Republican in the primary, and took 72% of the vote.

“My philosophy is ‘go big or go home.’ When I campaign, I campaign hard,” he says. And unconventionally, without spending a lot of money. Proud would go to a local Walmart or the mall, and have himself paged. “People would hear the name ‘Bob Proud’ and it would plant my name. I’d ask my friends to call WOBO and dedicate a song to me. I went to every function and every event. I went to the County Fair and shook every person’s hand. I put a lot of sweat equity into my first campaign.”

“The best lesson I got was from Lois Brown Dale who told me, ‘You need to have the hide of a rhinoceros.’ And I do. I don’t take things personally. Sometimes I have voted no, but it’s never personal and then you move on because that is the decision of the board.”

Commissioner Proud joined Commissioners Martha Dorsey and Jerry McBride after he was elected, and he faced a couple of controversial votes almost immediately. One was to finalize the building of the Ohio 28 Bypass – “extremely controversial and necessary” – and the other was to approve a 30% fee increase for water/sewer customers to pay for improvements to the county’s wastewater treatment plants.  “We had to get out from under a consent decree from the Ohio EPA to repair the plants. We presented the case to our citizens and we voted for the increase,” he said.

Commissioner Proud leaves office pleased that Clermont County, with a healthy reserve fund and yearly appropriations that never exceed the previous year’s revenue, is in good fiscal shape. “We can sustain ourselves during a downturn, as we did during the last recession,” he said. “That takes discipline, of saying ‘we can’t afford this.’”

Obligation to those who serve

Ever since he took office, but particularly with the start of the wars in Afghanistan and Iraq, Commissioner Proud has felt a special obligation to Clermont County’s men and women on active duty and their families. The loss of 12 local men in the two wars since 2004 is one that he feels very acutely. Their pictures are hanging on a wall of tribute on the third floor of the Administration Building, as well as in his office.

Proud arranged a public memorial service for each of them (as long as their family approved) and he stays in touch with each family. “It was important for me to say to the family ‘what can we do for you’ after such a devastating loss,” he said.

In 2009, Commissioner Proud began Whole in My Heart, a support group for families of those being deployed. “We were doing so much for our troops, and I thought ‘we’re not doing anything for the families.’” At its largest, the group had more than 400 members, and it still meets once a month at the Union Township Civic Center. There are fewer people now, but they still have something in common, he says.

“When you come to the meeting, you are surrounded by people who know exactly what you’re going through,” he says. “As long as they’re deploying, we’re supporting,” he says.

As he nears the end of his tenure, Commissioner Proud reflects on what he learned from his greatest teachers, his parents. “My parents told me to be always be honest, and to treat others the way I would want to be treated.

“My mother said, ‘Your name will always go further than you ever will.’ That, and my Christian faith, has helped me stay grounded. When people hear the name Bob Proud, I hope that they associate that with honesty and integrity. Those are the values I will be imparting to my son.”

So this politician leaves proud of his county and the positive strides that have been made during his tenure. Proud to make Clermont County his home and to raise a family here. Proud of those military men and women who are serving, have served, and those who have paid the ultimate sacrifice for our freedom.

Yes, Bob Proud is a politician and he is proud of it.