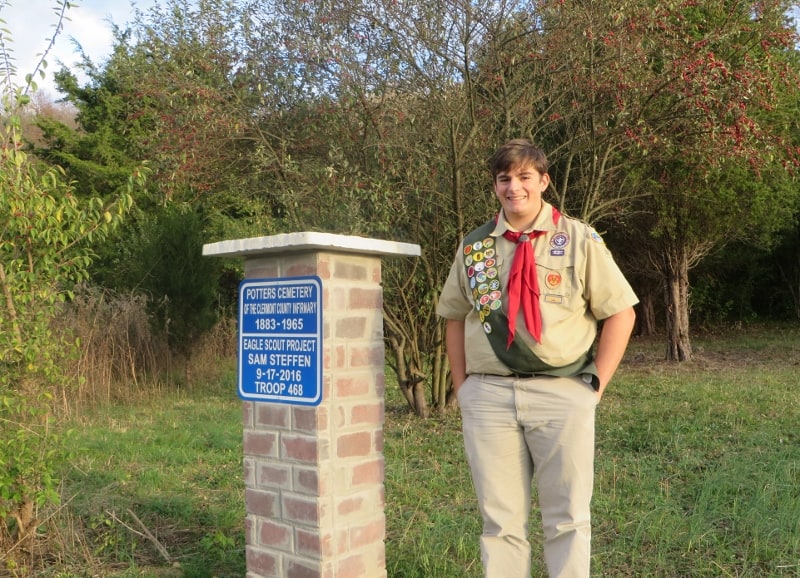 Sam Steffen and his fellow Scouts cleaned up the Potters Field that sits above the County Jail. 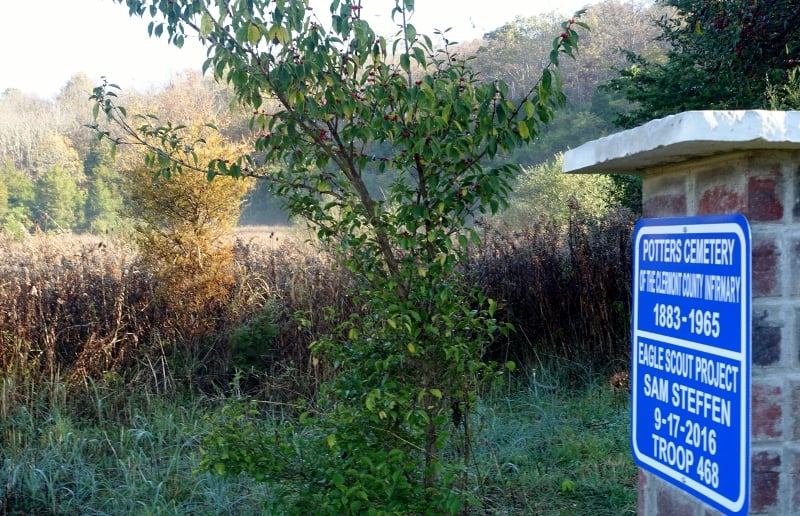 Bodies are buried in this unmarked field, but it’s not known how many. It’s where the indigent – those without any financial means – were buried in Clermont County if they happened to live in what was called the Infirmary or the County Home. Municipal Court now stands there.

The Infirmary housed poor people – known as paupers — who were mentally or physically disabled, orphans and the elderly, according to Clermont County historian Richard Crawford. At some point, it became known as the Old Folks Home. Before it was torn down in 2002, the building housed welfare offices for the county.

Last spring, Sam Steffen, 18, and now a senior at Moeller High School, learned about the Potters Field, which was overgrown with honeysuckle and weeds. Sam was looking for an Eagle Scout project, and through a Scout leader he found out about a possible project suggested by former Municipal Court Judge George Pattison. Pattison, now in private practice in Batavia, had long thought that the Potters Field should be cleaned up, and he believed it would make a good project.

Judge Pattison learned about the cemetery back in the early 1980s, when the county land on Filager Road was being prepared to house a new County Jail. “Tom Cole was the architect for this project,” Pattison said. “As the soil was being prepared, he asked me ‘Does anyone know there is a Potters Field back behind this area?’ Everyone said no.” Eventually, Pattison said, a retired commissioner said that he knew there had been a Potters Field on the property. (In fact, there may be more than one field that was used for burials.)

Once Sam decided he wanted to clean up the field, Judge Pattison wrote a letter of introduction on Sam’s behalf to the County Commissioners to get the project rolling.

Sam, who lives in Loveland, joined the Cub Scouts in first grade. Since fifth grade, he has belonged to Boy Scout Troop 468 out of Trinity Methodist Church in Miami Township. “The Scouts have been my go-to group my whole life,” Sam said.

“I was looking for a big project for my Eagle Scout project,” he said, explaining that Eagle Scout projects have to demonstrate planning and leadership. And the project has to be completed before the age of 18. The project was approved in the spring of 2016, but Sam didn’t start to work on it in earnest until August.

On Friday, Sept. 16, Sam and father, Tim, went out to the site. They made a path to ensure that the Scouts could make it to and from the field. Sam and his father poured the concrete that would hold the post he built from bricks.

The next day, his Scout buddies came out in force – almost 20 of them, along with some adults. They worked in shifts as they cleared the field of overgrown honeysuckle. They used weed whackers and chainsaws to cut through the brush.

It took a day, but the project was completed – field cleared and mowed, post built, brush removed. Shortly after, the county installed a sign in honor of the field and of Sam’s work.

“I was extremely relieved when it was done,” said Sam. Now he is focused on college, and he plans to study pre-med at either the University of Cincinnati, University of Dayton, or Miami University.

Judge Pattison is happy that the project has been completed, and that a sign now marks the field where many are buried. “The graves that are there needed to be given appropriate care and respect,” he said.

What are Potters Fields?

Potters Fields or cemeteries are found throughout the United States. The indigent – those without any financial means — were often buried there. The most famous Potters Field is Hart Island in New York City – more than 1 million people are buried there. According the Wikipedia, the term derives from the Bible, “referring to a ground where clay was dug for pottery, later bought by the high priests of Jerusalem for the burial of strangers, criminals and the poor.”

About the Clermont County Infirmary

According to historical records, in 1856, Clermont County Commissioners decided to buy 120 acres of land on a farm outside Batavia from Reader W. Clarke for $8,400 to house the “paupers of the county.”  This included orphans, the elderly poor, and those who were physically and mentally disabled. A new Infirmary was built for $4,998, and the county took possession of it in December 1857. In July 1877, it was destroyed by a fire. A new building on what is now known as State Route 222 was completed in 1885. It stood four stories tall, and consisted of 100 rooms and a courtyard. It was a working farm. Residents raised livestock and farmed vegetables, including  corn, potatoes, tomatoes, beans, cabbage and onions.

The Infirmary, also known as the Infirmary Farm, County Home and Old Folks Home, closed in 1965. However, the building was used for county offices until it was torn down in 2002 to make room for the new Municipal Court. 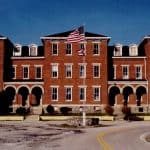