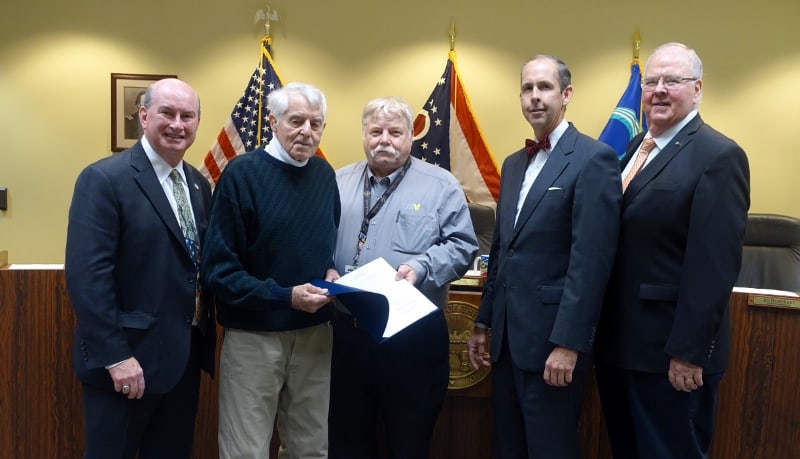 Whitt, who lives with his wife, Judy, in Bethel, is a survivor of the Pearl Harbor attack on Dec. 7, 1941. At the BCC session, he recalled that day. Whitt was only 17 and just out of Bethel High School when he enlisted as a Seaman in the Navy. In 1940, he was sent to Pearl Harbor aboard the USS San Francisco. “For one year, I had the time of my life in Hawaii,” he said. “It didn’t take long for that attitude to change.”

The day of the attack, Sunday, started just like any other, he said. “We had no idea a lot of us were going to die that day,” he said.

He and other seamen were dressed in white Navy shorts and T-shirts. Some were attending church as the attacks began just before 8 a.m. The San Francisco was in dry-dock, and a huge crane covering it helped prevent damage to the ship as the bombs fell.  “They sounded ‘Battle Stations,’” he said. “I was out in the open. You could see the Japanese planes. All you could hear was ‘boom, boom, boom.’”

Whitt witnessed the sinking of the USS Arizona, USS Oklahoma and USS Utah, which were hit by bombs or torpedoes. He remembers being given a Marine rifle to use; very few arms and little ammunition were aboard the San Francisco while it was in drydock. “They sent us to the rear of the ship, and we were shooting at planes with our rifles,” he said.

Whitt served for six years and in 17 major battles during World War II. When he left the Navy, he was a Bosun Mate 1st class. He worked for 38 years as a service technician for Coca-Cola.