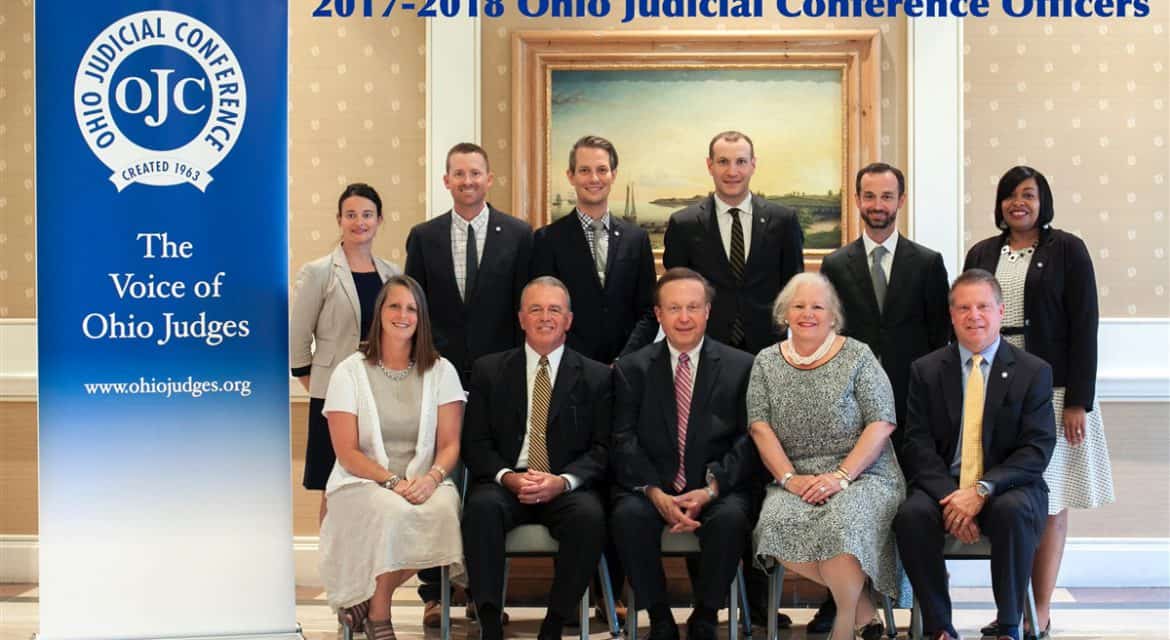 Newly elected officers of the Ohio Judicial Conference for 2017-18. Judge James A. Shriver is front row, center.
By Kathleen Williams

“I am both humbled and honored that the judges of Ohio have placed their confidence and trust in me to lead the Ohio Judicial Conference in this time of a new beginning,” Judge Shriver said.

“Public confidence in our judicial system is essential to maintaining an orderly democratic society. I look forward to working closely with judges, courts and other entities to ensure the fair, effective and efficient administration of justice. Our organization must encourage and facilitate initiatives at the state and local level to enhance public knowledge about the justice system and the role of courts. We will endeavor to further improve the quality of justice for all Ohio citizens.”

The Ohio Judicial Conference, a state entity in the judicial branch of government, works to improve the administration of justice. Judge Shriver will help lead the work of over 20 committees of judges active in all areas from judicial ethics, public confidence and community outreach.

Before being appointed by Gov. John Kasich to the Juvenile/Probate Division in July 2013, Judge Shriver served 18 years as a Municipal Court judge in Clermont County. During his 21 years of service on the bench, Judge Shriver has pioneered many innovative programs designed to improve the critical thinking of offenders, reduce the rate of recidivism, and provide meaningful alternatives to jail time for many offenders. Judge Shriver began Ohio’s first OVI (Operating a Vehicle while Impaired) Court in 2005. It has become a model for other OVI dockets throughout Ohio and has been recognized numerous times.

Judge Shriver currently operates a Family Dependency Treatment Court to address the needs of drug addicts whose children have been removed and placed in the temporary custody of Clermont County Children’s Protective Services.

Judge Shriver has been a strong advocate of the victims of crime. He began his legal career as an Assistant Prosecuting Attorney in Clermont County, where he established the Victim Assistance and Mediation Program for misdemeanor cases. Recognizing that individuals and businesses can both be victims of crime, he developed and implemented a check resolution service in addressing bad check writers.  Over a period of 6 years, the program collected more than $1.9 million for crime victims.

He also developed a felony crime victim assistance program, which has served more than 5,000 victims. The late Chief Justice Thomas J. Moyer of the Ohio Supreme Court awarded a Certificate of Exemplary Services to Judge Shriver in recognition of his exceptional commitment to Ohio crime victims.

Community involvement is an important part of Judge Shriver’s judicial service.  He served as a member of the Clermont County Youth Services Advisory Board for 11 years.  He also served as a member of the Clermont County Child Abuse and Neglect Advisory Board for 10 years.  Judge Shriver is the present Chair of the Commission on Specialized Dockets of the Ohio Supreme Court.  He is the Past Chair of the Criminal Justice Committee and the Traffic Law Committee of the Ohio State Bar Association, and a Past President of the Association of Municipal/County Judges of Ohio.  He is the current President of the Mission Foundation of the Ohio River Valley District of the United Methodist Church.

Judge Shriver has received the President’s Award for Judicial Excellence from the Association of Municipal/County Judges of Ohio, presented in recognition of outstanding and meritorious service as a municipal court judge. The Ohio Justice Alliance for Community Corrections awarded Judge Shriver the distinguished C.J. McLin Award given to an elected official who has worked towards the improvement of community corrections in Ohio.

Other recognitions include the Wasserman Champion Award given for championing innovative services for consumers of mental health, alcohol and drug addiction services, the Safety and Justice Award from Clermont 20/20 and an award from the Clermont County Domestic Violence and Sexual Assault Task Force.