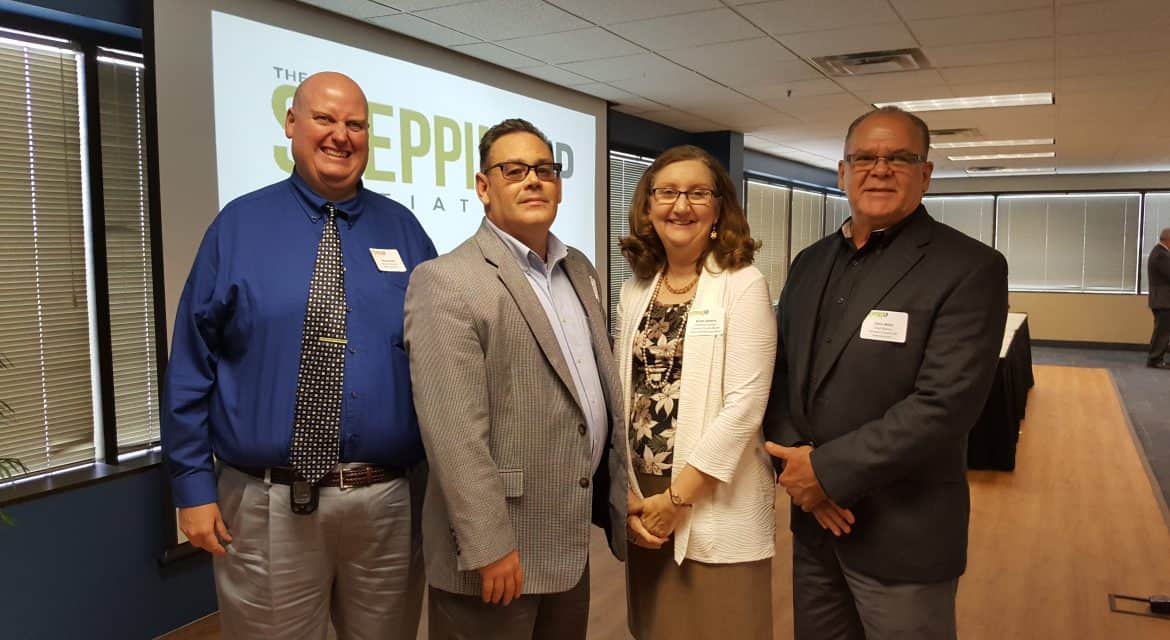 BATAVIA, Ohio – Clermont County is ahead of the curve when it comes to the nationwide Stepping Up Initiative, an effort to reduce the number of mentally ill people in jail.

The Stepping Up Initiative, supported by  the National Association of Counties (NACo), the Council of State Governments Justice Center, and the American Psychiatric Association Foundation, was  presented last year at the annual convention of NACo in Charlotte, N.C. Commissioner Ed Humphrey and  Karen Scherra, Executive Director of Clermont County Mental Health & Recovery Board (MHRB), attended the conference, and, in September 2015, Clermont County Commissioners passed a resolution supporting the initiative.

“The initiative says it will build on innovative practices throughout the country, and in Clermont County we believe we have some to share,” said Commissioner Ed Humphrey. “This has been a major concern of ours for several years, and we have worked in a collaborative fashion to address it.”

In 2011, the county embraced Crisis Intervention Team Training, a four-day curriculum for law enforcement and corrections officers to help them better understand and de-escalate situations that involve those who have a mental illness or are dealing with a mental health issue. “This training teaches officers how to consider a different approach,” said Scherra, whose office does the training. “An officer can call for a trained clinician, who goes on the scene with the officer and helps to make an assessment and defuse the situation. Should this person go to jail, or a hospital?”

Scherra estimates that 75% of law enforcement and corrections officers in the county have gone through the training, which is offered twice a year. “The training involves role-playing,” she said. “Officers even begin to understand what it is like when a person says they can hear voices in their head.”

She added that MHRB now gets calls from family members who say that the training made an “immediate difference. Police are much more understanding and knowledgeable,” said Scherra. “Families are not afraid to call police when a loved one is acting out.”

The county also conducts a two-day workshop for stakeholders in the mental health and criminal justice communities in “sequential mapping.”  “This looks at all the points where a mentally ill individual could come into contact with police, or the courts, or MHRB, or the jail, or the county administration,” said Scherra. “This shows us where our strengths are, but also where the gaps are.”

“In Clermont County, even given limited resources, we have always worked together on these issues,” said Scherra. “Treatment for the mentally ill is understood and well-respected by those in the criminal justice system.  We are just lacking in some of the resources that could divert people from jail, such as a crisis stabilization center where police officers could bring individuals who are experiencing a mental health issue but do not meet criteria to be hospitalized.”

Recently, a team from Clermont County attended a statewide conference on Stepping Up. Retired Ohio Supreme Court Justice Evelyn Lundberg Stratton, who serves as Project Director of the Ohio Stepping Up Initiative, is planning to visit several counties, including Clermont, to learn more about current practices.

According to Stepping Up, each year, an estimated 2 million people with serious mental illnesses are admitted to jails across the nation – a rate that’s three to six times higher than that of the general public. Nearly three-quarters of these adults also have drug and alcohol use problems. Once incarcerated, individuals with mental illnesses tend to stay longer in jail and upon release are at a higher risk of returning to incarceration than those without these illnesses.