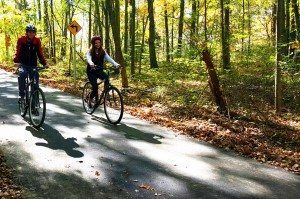 “The hike/bike trail began as a way to connect the villages of Batavia and Williamsburg by using roads that were abandoned during the construction of East Fork State Park in the 1970’s,” said Williamsburg Mayor Mary Ann Lefker, who is also a bike trail committee member. The trail is a collaborative project between several local agencies and jurisdictions. Phase I of the trail opened in 2009; when completed it will be nearly 15 miles long.

Phase III of the trail opened in October, bringing the length of the trail so far to six miles. “We are hoping to receive grant funding in 2016. The funds raised from the Rock and Roast will be used as a local match for any grants we receive,” said Julianne Nesbit, Health Commissioner for Clermont County Public Health and trail committee member. “The 2015 Rock and Roast generated over $10,000 that was used toward phase III of the trail; we hope to increase that amount in 2016,” said Nesbit.

“Our Rock and Roast is a fun way to spend what will probably be a cold January evening. Our rock will be provided by Hey! Mr. DJ Entertainment and our roast will be great food from 32Q catering. We will also have door prizes and a silent auction,” said Lefker.

Tickets for the fundraiser are $20. Tables can be sponsored for $200, with each table seating eight. To purchase tickets, or to sponsor a table, call the Village of Williamsburg at 513-724-6107.