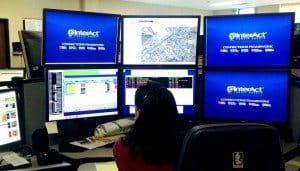 At their Nov. 4 session, Clermont County Commissioners agreed to the purchase of a  Motorola/PremierOne system for approximately $399,907. Because this system is integrated into the Ohio Department of Public Safety’s MARCS (Multi-Agency Radio Communications) system, the cost is much less than if Clermont County had purchased it independently, noted County Administrator Steve Rabolt. “This would have cost us from $1 million to $1.2 million if we were not part of the Ohio system,” he said.

“This is a much more robust system,” said John Kiskaden, Director of Public Safety Services. “We’ll have more functionality, especially on the fire and EMS side. This ability to map outside the borders of Clermont County could make a difference to responders.”

Now, for example, if police officers are involved in a chase, the mapping through the CAD system stops at the border of Clermont County. With the new system, dispatchers will be able to keep track of the officers as they cross over into another county.

Clermont County is the first multi-jurisdictional (police, fire, EMS) dispatch center – in Ohio to use this new system.

“One of our most important responsibilities as a county is to keep our communications equipment current so that we can keep our citizens safe,” said Ed Humphrey, President of the Board of County Commissioners. “We have been evaluating the new Computer Aided Dispatch software for over a year with the full participation of the Fire, EMS and Law Enforcement agencies in the county.

“This new CAD system will allow first responders throughout Clermont County to be even more effective.”