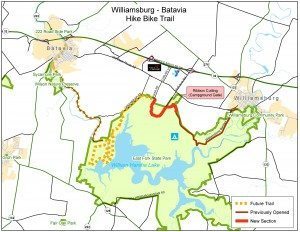 The trail, which will be 15 miles long when completed, is a combination of shared roadways and paved paths. It runs from Williamsburg to the East Fork State Park Campground and now to Zagar Road in Batavia Township.
According to Chris Clingman, Director of the Clermont County Park District, “This newest segment of trail is reusing the roadbed of old Zagar Road, which was abandoned during the creation of Harsha Lake and East Fork State Park. Clermont County Engineer Pat Manger’s staff prepared the old roadbed for paving.”  From Zagar Road, cyclists can connect to UC East and Clermont County YMCA via Curliss Lane and James E. Sauls Sr. Drive, he said.

The newest segment of the trail was funded by a $50,000 grant to Clermont County Public Health from Interact for Health through its Physical Activities Environment Grant Program. The grant was designed to help complete trail linkages and to provide opportunities for underserved portions of the Tristate population to have access to areas for physical activity. “This adds a location for no-cost physical activity, which is one of the main objectives of the county’s Community Health Improvement Plan,” said Clermont County Health Commissioner Julianne Nesbit.

To date, approximately $1.18 million has been raised for the bike trail through grants and fund-raising. Funding has come from federal Transportation Enhancement Grants, state capital project grants, townships and villages, as well as private sector donors including Peoples Bank (formerly National Bank & Trust),  Dualite Corp., Duke Energy, and United Dairy Farmers. An annual winter fundraiser has contributed from $6,000 to $10,000 per year.

“As each section of the Williamsburg-Batavia Hike/Bike Trail is funded and built we celebrate the collaboration and cooperation that is moving along with this awesome project, “ said Mary Ann Lefker, Mayor of Williamsburg.
“The Village of Williamsburg has already seen the benefits of having this trail connected to our village.  Our goal is to keep the trail moving forward towards Batavia and, as research has shown, that may only be the beginning of the connectivity to other trails throughout the region.”

Batavia Township trustees are also excited about progress on the bike trail.

“We realize the value to the residents of our community this trail provides as it connects the Villages of Batavia and Williamsburg to East Fork State Park,” said Randy Perry, Chairman of the Board of Trustees. “While benefits have already been realized, the completed trail will be well worth the efforts of the many partners that have thus far joined in the effort to create this trail.”

Park District Director Clingman noted that “where most trails are relatively flat, this trail is like taking a ride down an old country road. It takes you past fields, through woods, up and down hills, across creeks to some of the most scenic spots in Clermont County.

“Along the route there is an overlook of the East Fork River Valley, a wetland with observation deck, overlook of Harsha Lake, and a view of small waterfalls in Cain Run Creek, “ he added.

The trail is administered by the Clermont County Park District. Other partners include: 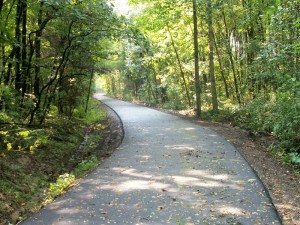 IF YOU GO
WHAT:  Ribbon cutting for newest segment of  Williamsburg to Batavia Hike/Bike Trail
WHEN: 2:30 p.m. Thursday, Oct. 15. Park at the East Fork State Park Campground gate; shuttle bus will start running at 2 p.m.
MISC: Following the ceremony there will be a walk on the newest segment and opportunity to take a short ride on a Bearcat bike; light refreshments will be available.