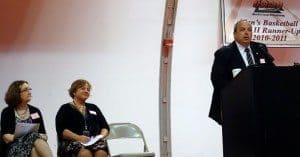 BATAVIA, Ohio (May 29, 2015) –  The Clermont County Opiate Task Force presented its “Breaking the Cycle” action plan to members of the community at a Town Hall held May 26 at UC Clermont.

“Every group, every income level, every race, every ethnicity has been hit by this in our community,” said Karen Scherra, Executive Director of the Clermont County Mental Health and Recovery Board.

“There are more people who need help than we can manage,” she continued. The epidemic of opiate addiction, particularly heroin, has impacted law enforcement, the courts, hospitals, as well as families who are devastated when a parent or child becomes addicted to heroin.

The task force, which is comprised of stakeholders from local government, law enforcement, the courts, public and mental health, education and the recovery community, outlined its strategies for treatment, prevention, harm reduction, and supply reduction at the event. Its plan has been more than a year in the making.

Bill Stearns, an attorney and retired magistrate who is a volunteer with SMART Recovery, outlined the treatment goals by 2016: medication-assisted treatment slots will increase from 175 to 500; slots in outpatient treatment will increase from 550 to 700; and 150 units of recovery housing in the county will be established.

Rochelle Jones, a prevention specialist with the Clermont Recovery Center, spoke about prevention strategies, which include expanding school programs throughout the county, and increasing awareness of prescription drug drop boxes, and adding boxes.

Harm reduction strategies include greater distribution of Naloxone, which can prevent deaths from heroin overdose, said Clermont Health Commissioner Julianne Nesbit. The task force is also committed to increasing the availability of support services for children whose parents are addicts.

The Clermont County Narcotics Unit – run out of the Sheriff’s Office and comprising officers from Pierce, Miami and Union townships as well as the Sheriff’s Office – will continue to focus on reducing the supply of heroin and pills in the county, said Chief Deputy Steve Leahy. Leahy urged citizens to call the drug tipline – 513-625-2806 – whenever they suspect drug activity.

“We lack some really basic services for a county of our size,” said Union Township Police Chief Scott Gaviglia, who is co-chair of the task force. To remedy that, he and other speakers said the county needed strong advocates to carry the message for more resources, and to help figure out how to get those resources.

(Photos: Above, Chief Scott Gaviglia opens up the town hall meeting May 26; left, Karen Scherra, of the MHRB, and Jennifer Biddinger of the Attorney General’s Office. Right, members of Opiate Task Force.)