Commissioner Proud Elected to 25th Term as Chair of OVRDC 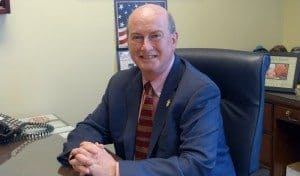 Proud was first elected chairman in March 1991, and has been re-elected annually since then. “I not only think but know that the reason Bob has continued to get elected as Chairman of OVRDC is the fact that he is a fair individual and has never let politics enter any decision that was made by the Executive Committee over the past 25 years,” said John Hemmings, Executive Director of the OVRDC.
This is his last term on the commission and as chair, Proud said. He will serve as chair through March 31, 2016.

“The OVRDC was set up in 1967, just a few years after President Johnson declared the War on Poverty, focusing on both urban and rural poverty, particularly in Appalachia,” Chairman Proud said. “For the Appalachian region in Ohio, which includes southeastern Ohio, that meant bringing more resources for projects to help the region economically. I am proud of what the OVRDC has accomplished over the years.”

Since 2005, the OVRDC, a local district of both the Appalachian Regional Commission and the U.S. Economic Development Administration, has brought more than $211 million into the region. Besides Clermont, other counties include Adams, Brown, Fayette, Gallia, Highland, Jackson, Lawrence, Pike, Ross, Scioto and Vinton.

The OVRDC prioritizes projects each year, meaning that not all counties will get an equal share of the pie – which can require some finesse on the part of the chairman, said Hemmings. “Bob doesn’t play politics,” Hemmings said. “Bob leads without any bias. That means that some years there may be no projects for a particular county, and Bob manages those expectations well.”

More than $4 million has come into Clermont County in federal and state funds under the auspices of the OVRDC since 2005. This has ranged from $1.04 million for the Loveland downtown redevelopment project and $475,821 for the New Richmond Front Street revitalization, both in 2009, to $504,400 for the UC Clermont College Center for Advanced Manufacturing in 2012.

Chairman Proud has also been instrumental in:

1) Bringing more diversity to OVRDC committees, especially through multiple appointments of women. Before his chairmanship, no women were on committees.
2) Moving the headquarters of the OVRDC to a more central location, from Portsmouth to Pike County in 1997. “Once that happened, our attendance shot up,” said Hemmings.
3) Building a new headquarters in a Waverly industrial park in 2013 and entering a lease-to-own arrangement for it; the OVRDC expects to pay it off by 2023. “This agency will have a permanent home at that time,” said Chairman Proud.

The OVRDC is one of four Appalachian regions in the State of Ohio. Clermont County is the westernmost Ohio county in Appalachia.