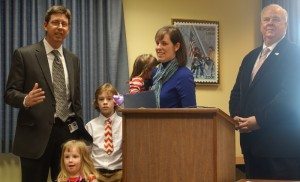 BATAVIA, Ohio (Feb. 25, 2015) — Clermont County Commissioners proclaimed March Developmental Disabilities Awareness Month at their session today. The accomplishments of individuals with developmental disabilities will be celebrated during the month.

There to receive the proclamation was Emily Chesnut, a parent and volunteer member on the Board of Developmental Disabilities, along with her son Evan and twins Nora and Katie. Nora was born with Down Syndrome and received early intervention services at Clermont DD. Clermont DD Superintentdent Dan Ottke also attended.

Part of the proclamation read: “Workplaces welcoming of the talents of all people, including people with disabilities, are a critical part of our efforts to build an inclusive community … and we must all think ‘ability’ an not ‘disability’ and encourage others to do the same.”

During the month of March, billboards will be up in Clermont County featuring Aaron Strait, a DD customer who works at Panera Bread in Milford. Informational booths will also be set up during the month.