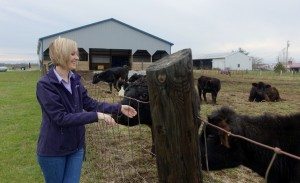 Sydney Snider grew up with cattle on her family farm.

She left Ohio State University after her first year but not to drop out. She took the year off to travel the state as president of the Ohio FFA Association, meeting with chapters across Ohio and spreading the word about careers in agriculture, which go far beyond traditional farming.

On  Feb. 18 March 11, Snider will be recognized by the Clermont County Board of Commissioners.

Growing up on a farm

Snider, 19, began raising animals for show shortly after her parents, Jamie and Ken Snider, moved to their farm in Moscow when she was 4 years old.

“It’s a hobby farm,” she said. Her parents keep about 20 head of beef cattle on the 45-acre spread. She and her twin sister, Carley, joined 4-H when they were 8, and each year they raised goats and pigs to show at the Clermont County Fair. They showed the cattle as well.

“In March or April my sister and I would buy the goats and pigs,” Snider said. “Sometimes we would have one goat each, sometimes two pigs each. The pigs would weigh 60-100 pounds once they were weaned and by the time we showed them, they would weigh 250-280 pounds.

“We learned about nutrition – what was good to feed them, what would help them gain weight,” Snider said. “And what they would need to keep them looking good.”

Active in school and at fair

At Felicity-Franklin High School, both girls joined FFA, and delved more into animal science, food science agricultural business and leadership. At the County Fair, Snider became part of the Royalty Court as the caprine representative and pork industry queen. In 2013, she set her sights on the state chapter of FFA, when she ran for secretary of FFA and won, positioning herself for the presidency in 2014.

Elected in May 2014 as president, Snider kicked off her term with FFA camp sessions in June and July.  “My role was helping new officers learn their roles,” she noted. Since the school year started, she has traveled to FFA chapters throughout Ohio. “I conduct leadership functions with each class. Sometimes we hold combined school district night sessions that can attract from 70 to 400 students.

So what has this year of getting up at 5 a.m. to drive to a new school meant to her? “Now I’m a big music buff,” she said with a laugh; music has made her long drives easier.  “And I’ve learned how different Ohio is – there is so much diversity. I really like that!”

Broadening the appeal of ag

Part of her responsibility is ensuring that more students understand how careers in ag go beyond production. “The greatest thing about FFA now is that we have pulled in more students who don’t have an ag background. They don’t have to go into production. There is more of an emphasis on STEM (science, technology, engineering and math). For example, veterinary science might be a career.

“One in 7 Americans have a job that’s somehow connected to ag,” she said.

Snider is majoring in agriculture communications at Ohio State, and hopes to go into broadcast journalism or public relations. She’ll go back to Ohio State as a sophomore next summer. “It’s been weird for me not to be in school,” she admitted. “I have to wrap my head around the fact that I am a year behind my sister. But over the past few months, I have a better understanding of myself and what I want to do in ag.”