Expanded Port District a Plus for Clermont County 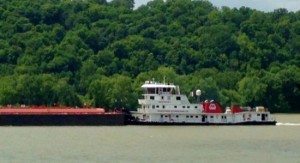 The new designation will make the Ports of Cincinnati & Northern Kentucky among the top 20 U.S. ports by annual freight tonnage and the second business inland U.S. port. Previously, the Port of Cincinnati covered 26 miles, and only included Hamilton County. The expanded district now includes all of Clermont County.

On Nov. 20, 2013, Clermont County commissioners approved a resolution supporting the expansion of the boundaries of the Port of Cincinnati to include the entire riverfront of Clermont County from river mile 429.5 to river mile 455.2 – a total of 25.7miles.

The Cincinnati and Northern Kentucky port authorities submitted the proposal to the U.S. Army Corps of Engineers Louisville District in April 2014. It was supported by 15 counties in Ohio and Kentucky, including Clermont; county commissioners throughout the region; congressional representatives; state legislatures; both governors, and many industry organizations.

Said Ed Humphrey, President of the Board of Commissioners: “Being the second busiest inland port in the United States will provide investment opportunities leading to job creation for Clermont County and the region. We want to thank the partners involved in this expansion for their leadership and working together to make this happen.”

“Clermont County has nearly 26 miles of riverfront along our southern border,” said Commissioner Bob Proud. “The increased marketing opportunities for the re-designated Ports of Cincinnati & Northern Kentucky should have a positive economic development benefit for our river communities.”

Added Commissioner David Uible: “The Ohio River has so many attributes, and this designation increases the awareness of the economic development potential for our region for those industries that use the river as a mode of transportation for either raw materials or finished products.”