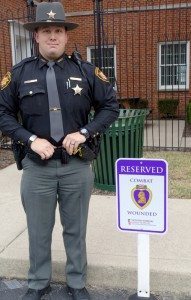 So when Ruck stumbled onto a Purple Heart Parking Facebook page, he thought this was something county government and businesses might commit to – ordering the signs and assigning a parking spot to wounded warriors.

The Purple Heart, the nation’s oldest military decoration still given, is awarded to those who have been injured or killed in battle.

Clermont County last week installed the Purple Heart parking signs in the lots of several buildings, including the Administration Building, Municipal Court, the Clermont Family Support Center, and the Heritage Building, which houses the Board of Elections and Veterans Service Commission.

Ruck, 26, of Amelia, served as an infantryman with the 3rd Battalion 8th Marines, Weapons Company, Combined Anti-Armor Platoon. A pressure plate IED exploded under his vehicle that day, and he suffered shrapnel wounds to both legs, his right arm and above his right eye. His left leg and wrist were burned. He broke his tailbone and lower back, and he suffered brain scarring from the blast itself. After several months of treatment in-country, he had additional treatment in the United States, followed by years of physical therapy and rehab.

Ruck joined the New Richmond Police Department in July 2013 and in May 2014 became a Clermont County deputy sheriff. “I was grateful to get hired on with the sheriff’s office,” said Ruck. “That was a career goal of mine even as a kid.” But as he becomes established in his new career, his commitment to his military brothers and sisters never wavers.

Ruck has reached out to local businesses, particularly in retail, about the signs, but hasn’t had any responses. The signs are paid for by Wounded Warriors Family Support; the only cost to the establishments are the cost of shipping, which varies by the number of signs ordered.

Howard Daugherty, Executive Director of the Veterans Service Commission, who possesses two Purple Hearts from injuries he sustained in Vietnam, is proud to have a designated parking spot for Purple Hearts in front of his building. “The spots are for those who are disabled, and it’s a great gesture showing our respect for those who have Purple Hearts, and shows our commitment to veterans,” he said.

(Photo: Sheriff’s Deputy Danny Ruck was behind the initiative to get Purple Heart parking signs into Clermont County, such as this one at the county Administration Building.)