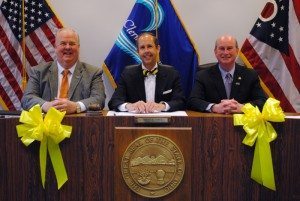 BATAVIA, Ohio (Nov. 21, 2014)  – The Clermont County Board of Commissioners approved an appropriations budget of $233 million for 2015 during their Nov. 19 session. The appropriation covers the county’s General Fund and all other funds under the budgetary control of the Board of County Commissioners (BCC).

The budget reflects increased General Fund operating revenues of $50.9 million, compared to $49.7 million in 2014. That reflects an uptick in sales tax revenue, according to Sukie Scheetz, Director of the Office of Budget and Management. The county is still below its peak year of 2007 when it had $53.3 million in operating revenues, she said, noting that the county has not fully recovered from the effects of the recent recession.

Commissioners outlined some priorities for the 2015 General Fund budget, which include:

Commissioners expressed confidence in the 2015 budget.

“This balanced budget allows us to continue to live within our means, but still target certain priorities for Clermont County,” said Commissioner David Uible, President of the BCC.

“We’re seeing companies starting to expand again, and they will bring additional jobs and revenue to Clermont County, which will help our budget outlook even more in 2015,” said Commissioner Bob Proud, Vice President of the BCC.