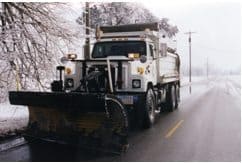 BATAVIA, Ohio (Oct. 27, 2014) – Clermont County will have enough rock salt on hand if Southwest Ohio experiences a typical winter, said County Engineer Pat Manger. But facing both a national shortage of rock salt, and much higher prices, the county will prioritize which roads it salts first.

The price of rock salt, used to de-ice roads, has more than doubled this year, Manger said, from $48 a ton last year, to $117 a ton this year. Not only that, rock salt is in short supply this year, at least partly attributable to both the huge demand of last year, and local and state governments restocking their stockpiles.

In a typical winter, the Clermont County Highway Department uses about 6,000 tons of salt. Last winter, one of the snowiest on record, the county implemented strong conservation policies due to salt shortages, Manger said. In fact, Clermont County had to manage its supply carefully as the endless winter continued through March, and could have used more salt.

This year, the county has about 2,500 tons of salt on hand, said Rob Alfieri, Administrator in the Engineer’s Office. “We have another 7,500 tons on order from Central Salt,” he added, and some of that is obligated to other Clermont County jurisdictions. “We estimate that if we have a typical winter, using 6,000 tons, we’ll have about 1,500 excess tons to sell to others entities that depend on us,” Alfieri said.

To ensure that its salt supply lasts, the county is putting other measures into effect. That includes more extensive use of brining – treating roads before a storm with a brine solution. “We expect to go a little more liquid this year,” said County Road Manager Woody Woodmansee. “We’ll put brine down prior to a storm, prioritizing steep hills, intersections and dangerous curves. That gives us a little bit of a jump when it comes to laying down the salt, and it also helps to eliminate the ‘hard pack’ that is created when cars tamp down the snow.”

The Engineer’s Office is currently working on an additional route system, prioritizing heavily used primary roads, as well as hills, curves and intersections, Alfieri and Woodmansee said. “Certain roads will be prioritized – those roads will be hit first,” Alfieri said. “Some roads will be considered secondary and won’t see as aggressive treatment as primary roads, but they will be cleaned up in due course.” Prioritization will be based on ADT – Average Daily Traffic – he said.

Clermont County has 26 trucks that can both plow and salt. The county typically has 19 routes, and can run rolling 12-hour shifts that allow it to cover operations continuously.