County catches up with Medicaid backlog 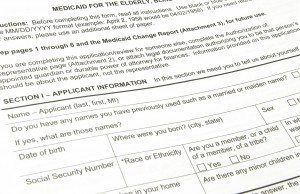 A black Medicaid applilcation waiting to be filled out.

BATAVIA, Ohio – Clermont County has caught up with the backlog of applicants caused by the expansion of Medicaid in the State of Ohio.

Under the Affordable Care Act, Medicaid eligibility was expanded in Ohio beginning on Jan. 1, 2014, leading to a surge of applicants throughout the state. The number of new applicants, plus issues with the federal marketplace exchange (www.healthcare.gov), where many applicants began the process, caused the backlog, said Judy Eschmann, Director of Clermont County Department of Job and Family Services (DJFS), which handles Medicaid.

Households up to 138% of the federal poverty level are now eligible for coverage. (For a family of four, this is $32,499.) The state estimated that more than 275,000 Ohioans would be newly eligible under these income guidelines. In Clermont County, 12,632 new Medicaid applications have been processed; of those, 8,097 were approved and 4,535 were denied.

Shonya Agin, Assistant Director for Public Assistance at DJFS, said that when she began her new position in August, the county had a backlog of about 1,800 electronic applications, as well as another 300-400 paper applications. The federal exchange did not process applications quickly, she noted, and many were stuck in limbo for months. “If they applied last October, and hadn’t heard back, we told them to apply again,” Agin said.

In August and September, her team quickly cleaned up the backlog using the new Ohio Integrated Eligibility System, and focused on new applications as they came in. “Once someone applies, we understand the urgency and process the application as quickly as possible, but we have up to 30 days to make an accurate eligibility determination,” Agin said.

Under the new guidelines, many more low-income adults who do not have dependents are eligible. This often includes people working part time or at low-wage jobs that do not offer health insurance. “Many of the people in this population have not sought medical treatment for a long time,” said Agin. “Now they can get medical attention and not wait until there is an emergency.”

“When we hired Judy Eschmann last year as the new DJFS director, we knew that one of her challenges would be to work through this tsunami of new applicants and additional claims work,” said David Uible, President of the Board of County Commissioners. “Her leadership and her team have allowed the county to handle much more work with the same number of employees and budgetary allotment.”

Added Commissioner Ed Humphrey:  “Once the State decided to expand Medicaid, it became the county’s responsibility to handle new applicants in an efficient way, despite many obstacles. We congratulate Judy and Sonya for clearing up this backlog, and helping those who are newly eligible for Medicaid to receive that benefit.”

Said Commissioner Bob Proud, “For many low-income people in Clermont County, the expansion of Medicaid will put them on the road to a healthier life, and ultimately save health care costs. We appreciate what Judy and her staff are doing to make that happen.”

To apply for Medicaid:  http://publicassistance.clermontcountyohio.gov/