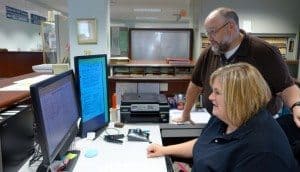 BATAVIA, Ohio (Oct. 13, 2014) – The airy and bright Recorder’s Office in Clermont County doesn’t appear to lend itself to spooky tales, but at least a few times each year, Clermont residents walk in with one thing on their mind.

They’ve seen, or heard, or felt something strange in their house. Now they need a ghostbuster.

Well, if not that, they want to do some detective work and trace the history of the home, or property, to figure out who lived there before and how they died.

And it’s not just homeowners. A few years ago, a team of paranormal investigators came in to the Recorder’s Office. “They had been hired by a local resident who had seen someone in colonial dress on the property,”  recalled Information Systems Coordinator Romain Walker. “So this team of investigators wanted to do a ‘Title Chain’ on the property.”

A Title Chain is exactly what it sounds like, said Walker. It’s a document that helps you to track prior owners of a particular piece of property, starting with the current owner. The customer would then track the property by each title change using records at the Recorder’s Office, sometimes going back to the 1800s.

That’s where things get complicated, said Marsha Collier, who works on special projects. Back in the late 1700s through the early 1800s, Clermont County was parceled out in patents, or warrants, by the Virginia Military District to soldiers from the Revolutionary War, as a reward for their service. (The Recorder’s Office has facsimiles of the Virginia Military Surveys and patents in bound volumes.)

The soldiers were awarded hundreds, sometimes thousands of acres depending on their length of service and rank. Some took possession while others did not, Collier said. “But it is difficult to trace back ownership past a certain point. The home that might now be on a quarter acre may be part of hundreds of acres owned by a soldier from the Revolutionary War.”

As the residents continue their investigation, they will check death certificates. “They want to know if a previous owner or someone in the home died violently, or maybe by suicide in a specific place,” said Collier.

And Walker pointed out that it’s not unusual for owners to dig up old headstones on their properties. “Clermont County has lots of private cemeteries,” he said, “where people were buried on the land that they owned. The owner wants to find out who that headstone belonged to.”

Most of the homeowners who go on these quests are good-natured, agree Walker and Collier, with only a few vowing that they will move. “We had one lady in Batavia who said that whenever she turned on music that ‘they’ didn’t like, ‘they’ would change the music. But she laughed about it.”

No matter what the reason a homeowner has for tracing past ownership through a Title Chain, the staff at the Recorder’s Office is happy to help them, said County Recorder Deborah Clepper.

They won’t even say boo.

Photo above: Romain Walker and Marsha Collier examine a deed through the Recorder’s archive system.