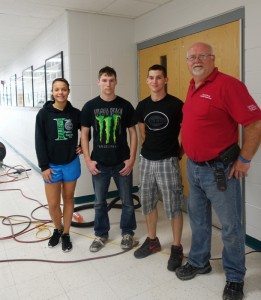 Picture above: Ashley Moore, left, Terry Patterson, Zachary Campbell, and maintenance supervisor David Diesel. All three students are working this summer at the school district. Zachary is preparing to enter the Army.

BATAVIA, Ohio (July 31, 2014) –  Fifteen teens working at Felicity-Franklin schools have spent the summer cleaning classrooms, scrubbing bathrooms, stripping and waxing floors, and painting walls and fences. And when they receive their paychecks, the teens’ reaction is similar: “It’s pretty exciting, actually,” said Mikey Simpson, 18, one of four brothers working at the schools.  “I actually earned this.”

The teens are part of a Summer Youth Employment Program funded through the Ohio Department of Job and Family Services (JFS), and overseen by Judy Eschmann, Director of Clermont’s JFS. Thirty-five youth are in the program. They are paid $10 an hour. Employers include the Clermont Mental Health and Recovery Board, the Clermont Board of Developmental Disabilities, Clermont Metropolitan Housing Administration and Clermont Northeastern Schools, said Bobbi Brafford of Easter Seals TriState which contracts with Clermont JFS to run youth programs.

But no employer has taken on as many kids as Felicity-Franklin schools.

For maintenance supervisor David Diesel, who has worked in the district for 25 years, hiring 15 teens represents a commitment to the youth who live in his community and go to Felicity-Franklin schools. “It gets the kids off the street, and keeps them productive,” he says. “It gives them a sense of pride in the school, too.”

The teens – 13 boys and 2 girls – have made a huge difference, he said. “They’ve helped the school district and my staff. We are about two weeks ahead of where we would normally be to get the schools ready for opening in August.”

All of the youth are from low-income families, and transportation is an issue. In most cases, they live close enough to the schools that they can be easily dropped off or walk, Diesel said.

The teens work 40 hours a week, and their weekly check of $400 can make a difference to themselves and their families. Brothers Marcus and Jacob Simpson are putting their checks into saving accounts, as well as buying some clothes for school. “One gentleman bought a new pair of boots with his first check,” said Diesel. “He was so proud.”

Zachary Campell, 18, will begin basic training in the Army at Fort Jackson, S.C., next week. “Working here has been pretty good,” he said. “You work hard for what you make.” Added Marcus Simpson, “This lets me know that I can handle a job.”

And that is precisely the reason why the Summer Youth Employment Program is important, said Eschmann.  It allows the teens, some of whom have never worked before, to see what it is like to work a 40-hour-a-week job, and be responsible to an employer. “They develop pride in their own work, and also have the tangible reward of a regular paycheck,” she said.

The program is funded through Temporary Assistance to Needy Families, so no wages actually come out of the employer’s budget. What the employer must pledge is guidance and supervision of the youth, which Diesel is happy to do. “The program has worked so well, I am hoping I can continue it into the school year as an after-school program,” he said.

“The success of this year’s Summer Youth Employment Program is a result of the positive relations between Clermont JFS and Easter Seals TriState. We worked together with employers to create job opportunities for young people in Clermont County,” said Eschmann. “If the Ohio Department of Job and Family Services makes this program available next year, Clermont County JFS hopes to serve twice as many youth.”