Helping parents find a job – instead of going to prison 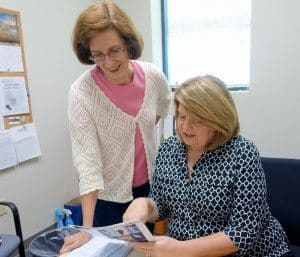 BATAVIA, Ohio (Aug. 1, 2014) – Since 2011, 132 parents who were indicted for criminal nonsupport of their children found a better alternative than going to prison – a job. Thanks to the Success Through Employment Program (STEP), operated by the Clermont County Common Pleas Adult Probation Department, these men and women are working and helping to support their children.

“About 14,000 Clermont County children depend on child support,” said Judy Eschmann, Director of Clermont County’s Job and Family Services Department, which includes the Child Support Enforcement division. “It’s the second largest source of income for single-parent families, and is crucial to the well-being of children.”

One of the most frequent reasons for not paying child support is lack of a job, said Eschmann. Success through Employment, which began in 2007 at the onset of the Great Recession, was designed to address that problem. In the last four years the program has connected 132 of 278 individuals to jobs where they have been employed for at least 90 days, a placement rate of 47%.

“Instead of going to prison, we help individuals find employment,” said employment specialist Ann Kruse, who works at the Clermont County Ohio Means Jobs Center, where STEP is located. Having the program at the jobs center and not at the county courthouse makes a difference, said Kruse. “When an individual comes in to see us, they see the professional setting, and that we are focused on getting  them a job,” she noted.

The program, which is partially funded through an $82,000 Community Correction Act grant from the Ohio Department of Rehabilitation and Correction, will enroll about 66 people this year, all referred from Adult Probation. “We have phenomenal support from judges,” said Kruse. “They know how important it is to get these offenders into jobs so that they can support their children.”

“This is not a cookie cutter program,” she added. “It’s tailored for each person.”

Kruse and her colleague Elizabeth Moran work intensely with their customers; if the parent is lacking a high school diploma or GED, Kruse and Moran can refer the parent to a GED program at the jobs center. They coach parents in workplace behaviors. They help them create a resume. The OhioMeansJobs center offers interview clothes closets for both men and women. Most importantly, Kruse and Moran work constantly with employers to find jobs that might be suitable for their customers.

“We also go to our customers,” said Kruse. “Transportation may be an issue for them, so we will meet with employers in their neighborhood, to see if there might be a match in skills. We will take our clients to interviews. Once they are placed, we monitor them, and help them if any issues emerge – like a car breaking down.”

“Our staff works tirelessly to identify new methods to help offenders remove barriers that have prevented them from securing employment in the past,” said Frey.  “These services not only help the offenders make positive changes, but also result in positive outcomes for their children through the restoration of child support.”

The goal, of course, is to get the parents into a job and on a career path that will allow them to support their children and keep them out of prison. “We tell them ‘You have to support your kids so they will have a future,’” said Kruse. “We’ve had people come back and say, ‘Thank you so much. I have a relationship with my children now.’ That means everything to Elizabeth and me.”

The Ohio Department of Rehabilitation and Corrections says this kind of program is effective. In fiscal year 2007, 790 offenders throughout Ohio were committed to prison solely for the offense of non-support of dependents, said Christopher Galli, Chief of the Bureau of Community Sanctions at ODRC. That compares to 342 in fiscal year 2014.

“This type of program targeted to offenders convicted of non-support is a perfect example of a community alternative that is more effective than prison,” said Galli. “It holds the offenders accountable for their responsibilities and allows them the opportunity to continue to pay support for their dependents.”