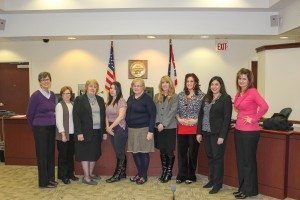 CASA for Clermont Kids and the Honorable Judge James A. Shriver held a swearing in ceremony on Thursday, February 13, 2014 adding eight new Guardians ad Litem to their volunteer based program.

CASA for Clermont Kids is a non-profit agency that advocates for the best interests of abused, neglected and dependent children who have been introduced into Clermont County Juvenile Court.  CASA recruits and trains community involved citizens to volunteer as Guardians ad Litem who independently work in the court system to serve as the child’s advocate and court representative.

Established in 1998, CASA for Clermont Kids served 231 abused, neglected, and dependent children in Clermont County in 2013 alone.  Typically, the children have been removed from their parents and placed in foster care due to no fault of their own.  The eight new volunteers will join the CASA team of 55 volunteers who volunteer their time to work with the children who find themselves in need of a voice in the courtroom.

When asked why she chose CASA, new CASA volunteer Meagan Garrett stated, “I chose to become a CASA volunteer because I could have used a CASA myself as a child. I want the children to know that I am here for them, I’m listening, and that they will be heard.”  CASA Executive Director Alison Royalty stated, “CASA for Clermont Kids success can only be credited to the generous support of the local community and volunteers like Meagan who want to make a difference in the lives of children.”

The number of children in need continues to rise each year.  CASA for Clermont Kids is in need of additional volunteers who are interested in giving back to the community.  For community involved citizens who wish to be the voice for a child within the court, you can make application for our year round training.   For more information on how to become an advocate contact Jess Seamon at Jessica@casaforclermontkids.org or 513-732-7166.  For more information about CASA for Clermont Kids or to learn more about our sponsors check out our website at www.casaforclermontkids.org.